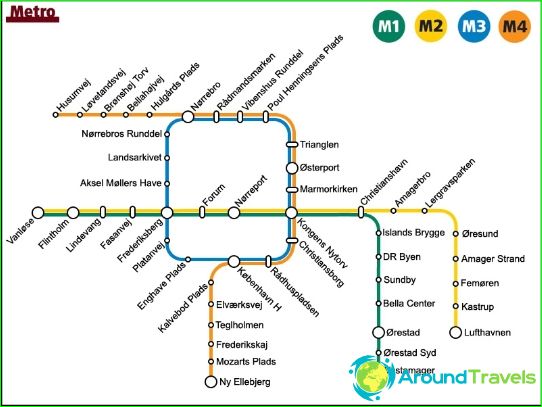 Copenhagen metro map
Copenhagen Metro opened in October 2002 with a fully automated line from the east to the west of the city. Despite the fact that the metro in the Danish capital is very young, 6 years after the start of passenger traffic, it has already been recognized as the best in Europe. The metro has two branches and 22 stations, only 9 of which are located underground (the length of the lines is 11 km), 13 are ground stations (the length of the lines is 12 km). Every year the metro carries over 50 million passengers (54.3 million in 2011). By 2018, in the future, the opening of 3 new lines, one of them will be circular. The first metro construction projects in Copenhagen appeared in 1992, their goal was to consider the most comfortable options for the residents of transport links between the city center and remote areas. Five years later, construction work began and 34 rolling stock were purchased from the Italian company Breda. The cars were developed jointly by Danish and Italian designers and constructors. They have ample hiking and wheelchair and bicycle areas. Due to the absence of a driver on the train (Automatic Train Control), a fascinating sight opens up for metro passengers from the wide window of the first car. On April 1, 2001, the so-called «false start subway», when, as part of the celebration of April Fool's Day in the center of Copenhagen, a layout was installed «flew to the surface» subway car. The model was a carriage from the metropolitan subway of neighboring Sweden. The real launch of the Copenhagen metro took place on October 19, 2002.<

Metro stations on the streets of the city can be found by the 5-meter information columns, which indicate the current station and the stations of the entire metro line are listed. Metro platforms can be reached either by elevator or escalator. Underground stations have transparent fences with sliding doors synchronized with the doors of the train, and ground stations do not have fences, however, an emergency stop system for the train is functioning when foreign objects hit the rails. Uniformed metro staff work at all stations, providing information and other assistance to passengers..

Copenhagen Metro operates around the clock. There are small 20-30 minute technical breaks at night on weekdays from 24:00 to 05:00, and 15 minutes on the night from Friday to Saturday and Saturday to Sunday. However, when using parallel lines, this process goes unnoticed for passengers, except for a 4-day overhaul period, which takes place every 2 months exclusively on weekdays (nights). Train intervals range from 2 minutes during peak hours to 20 minutes at other times.

Metro tickets can be bought at ticket machines or at ticket offices at stations. At the first pass, they must be punched in one of the validators installed in the station lobbies. The fare for the Copenhagen metro is zonal. The metro is divided into 4 zones. Within the 1st zone, the payment is fixed, then the payment increases according to the distance (number of zones). 50% discounts on travel are valid for children under 16 years of age. For children under 12 years old, travel is free, but an adult must be accompanied.