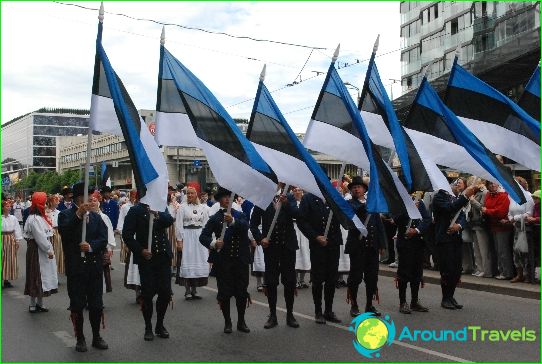 Estonian holidays are traditionally celebrated noisy and on a grand scale. In total, the calendar of festive events includes 27 dates.

Candle Day is celebrated on 2 February. It is celebrated in a rather unusual way. It is customary to cook porridge and meat dishes on the festive table, but always from pork. Women on this day were not only allowed, but even supposed to drink red wine. It was believed that in this case, the summer will be warm and serene. Women were given the right to visit the inn, while men were engaged in household chores.

On this night, residents arrange night walks around the city, singing merry songs. Laughter and music are heard everywhere. And this is all for a reason. Walpurgis night falls on the evening of April 30. It is today that witches arrange their Sabbath, and only a loud noise can scare away evil spirits. Here are the townspeople and try their best.

Jaan (Ivanov) Day is celebrated on June 24, and Estonians consider it a day of witchcraft and various miracles. The girls arrange fortune-telling. To do this, you need to weave a wreath, which consists of nine types of flowers. After a girl decorates her head with a wreath, she no longer has the right to talk. In it, she must spend the whole night. According to the existing belief, in a dream the betrothed will come to her and take him off.

Halloween is traditionally celebrated on the night of October 31st. Residents of cities dress in carnival costumes and in this form arrange carnival processions. Children unleash all their imaginations by dressing up in the scariest costumes. And then they go home with sacks, frightening their owners with their appearance and threatening them with all sorts of troubles. You can buy off them with sweets. In fact, these are classic Slavic carols, only in a more aggressive performance..

There are several holiday dates in Estonia dedicated to perfume. And Kadrin Day is one of them. Kadri is the patroness of sheep, therefore, mating of cattle was carried out on this day.

It is customary to dress up for the holiday, and children use this tradition to the fullest. Kids dress up as various fairy-tale characters and go to all houses. After the door opens, the children sing a song, hoping to receive sweets for it..

Officially, the holiday began to be celebrated in 1992, and it falls on the second Sunday in November. While this date is accepted by the majority of the country's residents as an official innovation, it is gradually gaining an increasing number of fans..

Children give their fathers homemade postcards. Most often, these are paper-cut ties or cars..