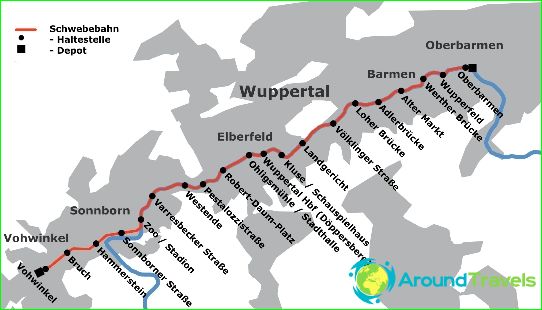 The subway of the German city of Wuppertal is a monorail railway that is suspended from overpasses. It has two tracks, and the total length of its tracks is 13.3 kilometers. There are 20 stations equipped for the needs of passengers. Most of Wuppertal's metro tracks run over the river bed in the city. The height of the flyovers over the Wuppert River is 12 meters. The remaining three kilometers of the road are laid above the city blocks at a height of eight meters.
The Wuppertal Suspended Railway has been in existence since 1901. Despite its venerable age, this type of urban transport is very popular with the townspeople and guests of Wuppertal. The Eugen Langen monorail system, as the Wuppertal metro is officially called, carries at least 25 million passengers annually. The railway line runs through all areas of the city and allows its residents and guests to quickly cover the distances to the most important infrastructure of Wuppertal.
Despite its seemingly dangerous construction, the Wuppertal Suspension Railway is considered a reliable vehicle. However, history contains examples of incidents that happened to the passengers of the Wuppenthal metro. The worst accident happened here in 1999, when the train lost its grip and found itself in the river..
Another memorable contingency in the Wuppertal metro happened in 1950, when the director of the circus decided to advertise his troupe by riding an elephant in a train carriage. The four-legged giant did not appreciate the creativity of the idea and, breaking the wall in the carriage, fell into the river. Fortunately, there were no sad consequences, and the result of the advertising campaign was minor injuries to the elephant and several passengers and the image of a fallen passenger with a trunk on the wall of a house between Alter Markt and Adlerbrucke metro stations.

Opening hours of the Wuppertal metro

Photos of the Wuppertal metro