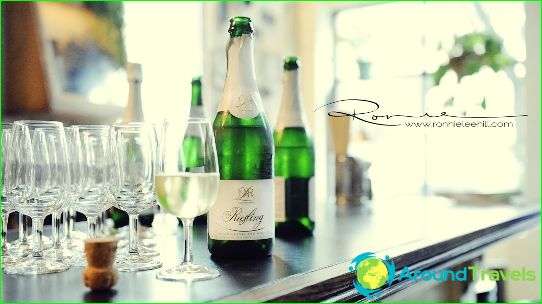 Germany - only at the very first glance may seem like a country where only beer is drunk and produced. In fact, the entire south-west of the country is covered with vineyards, and the wine-making traditions of the Germans date back to the times of Ancient Rome. Today, Germany's wines are popular all over the world, and in terms of the number of wine products produced, the country confidently occupies its niche in the top ten in the world..

To each his own

White varieties account for two thirds of the total volume of wines produced by the Germans. For wine lovers, Germany is associated with both the homeland of cheap semi-sweet brands like "Milk of the Beloved Woman" and a country that produces exquisite and elite names.
In Germany, there is a law regulating the list of grape varieties allowed for cultivation. It includes more than 60 types of white grapes and 30 - red.

German punctuality and accuracy could not but affect the classification of German wines. Each of them must be assigned to one of several groups. If the wine does not fall under any of them, it simply does not exist:

The variety of technologies for collecting fruits and making wine allowed the Germans to take their rightful place on the European wine-making Olympus.

The popular tourist route in the south-west of the country has been dubbed the "German Wine Route", offering guests splendid views of the banks of the Rhine, where for many hundreds of years the vine and the sun have created amazing fruits, which are named after grapes..