Home › Articles about Hong Kong › Airport in Hong Kong: scheme, photo. How to get to Hong Kong airport

Airport in Hong Kong: scheme, photo. How to get to Hong Kong airport

Articles about Hong Kong
by Audrey 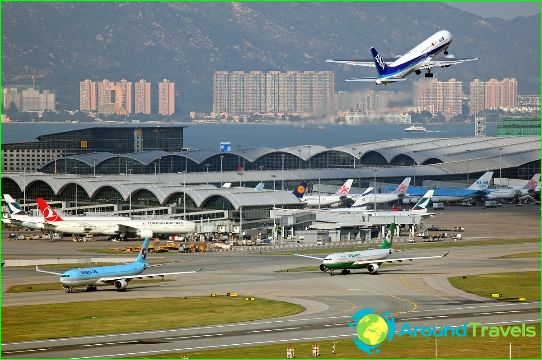 The airport in Hong Kong is called Chek Lap Kok, after the island on which it is located. Most of the aerial complex is built on an artificial artificial island that connects two natural island formations. The airport in Hong Kong is the fifth largest in the world in terms of passenger traffic and one of the first in terms of passenger convenience. The terminals of the terminal are connected by a shuttle system, consisting of three stations, which allows quick movement from the check-in hall to the exits to the aircraft.

Chek Lapkok Island Airport is connected to the city by a developed transport infrastructure - several buses run here, and a large SkyPier ferry terminal operates on the territory of the airport. Passengers using ferry services can reduce customs and immigration clearance times.

The largest terminal is an eight-story building with check-in counters on the ground floor, customs and immigration controls on the fourth floor, passport control on the sixth floor, and ticket checks and boarding on the eighth floor through a panoramic, separate express elevator.

The entire terminal is a shopping, entertainment and restaurant area that provides a wide range of services in various industries for visitors and passengers of the airport. The rooftop also houses an observation deck and an open-air restaurant, ready to offer a great time while waiting for boarding. Of course, the airport in Hong Kong offers several recreation areas, including luxurious business lounges with cozy armchairs, wireless Internet and a conference room, family rooms with children, where a small passenger of any age will receive rest and care, the ability to maintain a sleep and nutrition regime. , as well as play on a specially equipped area. The entertainment areas of the terminal offer amazing services for children and adults - from 11.00 to 22.00 the Aviation Discovery Center is open, where anyone can feel like a pilot or an air dispatcher. And for children, Dream Come True Education Park is open, where kids can get acquainted with various professions and play pilots or doctors with a full set of play accessories, including uniforms.