Articles about Hungary
by Amber 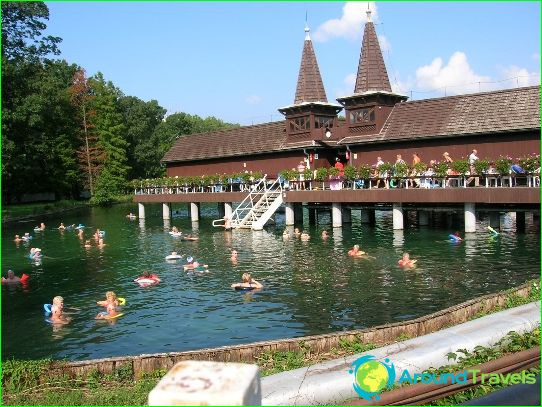 Lake Heviz in Hungary and the town of the same name on its shores are widely known in Europe to fans of thermal pleasures. Hundreds of diseases are cured in the local health resorts, because the waters of the lake contain all the useful elements of the periodic table. Every year, tours to Heviz are booked by thousands of people who want to part with their ailments and just enjoy life at the popular balneological resort.

The most beautiful flower is depicted on the coat of arms of the city of Heviz. This is a water lily brought to Hungary from distant warm India. Hundreds of flowers cover the surface of the lake, the water temperature in which, even in winter, does not drop below +27 degrees.
Lake Heviz is the largest in the Old World with similar healing properties. Its waters are rich in calcium and potassium salts, iodides and fluorides. The lake is renewed almost completely every day, thanks to underground springs.
Participants of tours to Heviz safely heal joint pains of various etiologies and radiculitis, relieve gout inflammation and improve blood circulation. Steam rising above the lake creates a special microclimate and contributes to the improvement of the respiratory system.