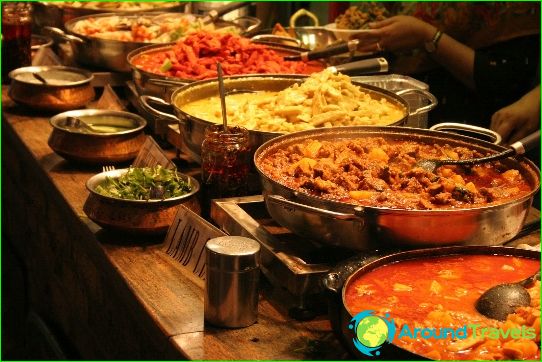 Many people associate tasty and healthy food with Indian food. The cuisine of this country has long enjoyed the attention of gourmets and those who follow their diet. Indian dishes are based on recipes that are considered exotic by Europeans. The main emphasis of the Indians is on vegetarian food..

Many dishes are prepared with legumes and vegetables. Such food is referred to as sabji. Dishes are necessarily seasoned with traditional spices. For the local population, rice is of particular importance. It is included in many dishes, among which thali is considered the most popular. This is a rice with a tortilla, which is often eaten with curries. The latter name implies stews or vegetables with or without meat. Thanks to this dish, curry came to be called a mixture of aromatic spices and plants based on turmeric..
Curry is the most popular concoction in India. It contains nutmeg, red and black pepper, cinnamon, ginger, cloves, dill, saffron and other ingredients. Indian cuisine is largely limited by religion. At the same time, Hindus do not feel the need to change something in their customs. They honor their traditions, which have not changed for many centuries. In Hinduism, the sacred animals are the cow and the bull. Their meat is strictly forbidden to be eaten. Indian Muslims also adhere to this rule. Hindus do not use eggs, considering them the beginning of all living things and a symbol of the earth. Indian dishes are prepared mainly from rice, vegetables, peas, corn and lentils. Pilaf is a very popular food. It is made with vegetables, beans, vegetable oil.
Islamic traditions have influenced the cuisine of the northwestern regions of the country. Therefore, tandoori chickens are the national dish there. In Indian cuisine, Punjabi and Kashmiri are distinguished. Beef is used in Punjabi dishes. Many dishes are cooked there with meat. For example, lamb in pots, pork tandoori, chops with spices, shashlik, etc. Indian national dishes are necessarily made with garlic, onions and peppers..

Desserts in India are very diverse. Chefs prepare balls in aromatic syrup - gulabjamun, lavender pudding - wattilappam. Coconuts, pistachios and almonds are served on the sweet table. Of the drinks, Hindus prefer tea. It is usually drunk strong and with milk. Coffee is no less popular in the country. This drink is made in an oriental way, adding pink essence for aroma..