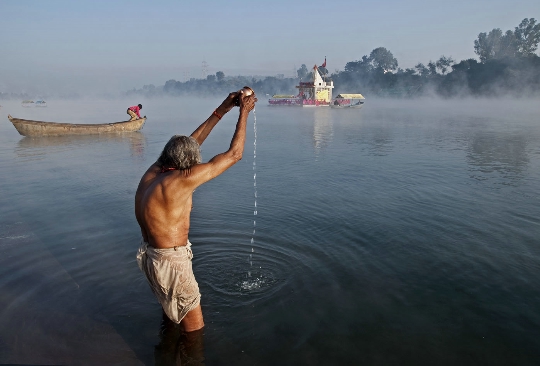 Water is very important for Hindus. The rivers of India are sacred for the inhabitants of this country. It is quite difficult for Europeans to understand such an attitude..

The Ganges is the third richest river in the world (second only to the Amazon and Congo). The total length of the river is 2,700 kilometers, making it the longest river in India. The source is the Western Himalayas (Gangotri glacier), and the waters of the Ganges flow into the Bay of Bengal.

In the mythology of the country, the Ganges is a river flowing through the sky. But the gods allowed her to descend to earth, and already in earthly existence she became the Ganges. The waters of the Ganges are sacred to the Hindus. Numerous pilgrimages are made to the banks of the river, cremations are carried out on its banks.

The waters of the river are rich in fish, which the locals use for food. Crocodiles and huge turtles are also found in the Ganges..

The Brahmaputra is the largest left tributary of the Ganges, belonging to three countries: China; India; Bangladesh. In Bangladesh, the river is known as Jamuna, but it becomes Brahmaputra in India. Its waters are also considered sacred: in them people perform ritual ablutions, in which they bury their deceased relatives. Ideally, the ceremony involves the burning of a raft with a body, but since the poor have no opportunity to acquire a raft and firewood, the deceased is simply lowered into the water. The rest of the burial work is done by fish and crocodiles..

The total length of the river is 2,900 kilometers. The lower course has changed its course many times. The reasons for this are the huge amount of precipitation and frequent earthquakes. In summer, the water can rise above the critical level by 8-12 meters, which causes severe floods. The river is navigable only in the lower reaches and in Tibet.

The Godavari is the second largest river in India after the Ganges. The source of the river is located near the town of Trimbak (state of Maharashta). Godavari flows into the Bay of Bengal.

The Godavari, like the main part of the country's rivers, is especially revered by the Hindus. Several large pilgrimage centers are located on its banks. Main tributaries: Indravati; Manjira; Pranachita; Vainganga; Wardha; Kinnerasani; Sileru.

Krishna is a fairly long river (1300 kilometers) with a source in the state of Maharashta. It flows into the waters of the Bay of Bengal. The birthplace of the river is more than unusual. In the small town of Mahabalnshwar, in the temple of the god Shiva, there is a statue of a sacred cow. A spring gushes from her mouth, which gives birth to the Krishna river..

The banks of the river are home to many shrines. This is the Dattadeva temple (Maharashtra district); Audumber (Sangli); Sangameshwar temple (Sangli). Like the waters of the Ganges, Krishna is a sacred river. It is believed that ablution in its waters washes away from a person all the sins he has committed..