Capital of Ireland: map, photo. What is the capital city of Ireland?

Articles about Dublin
by Alexis

Dublin - the capital of Ireland 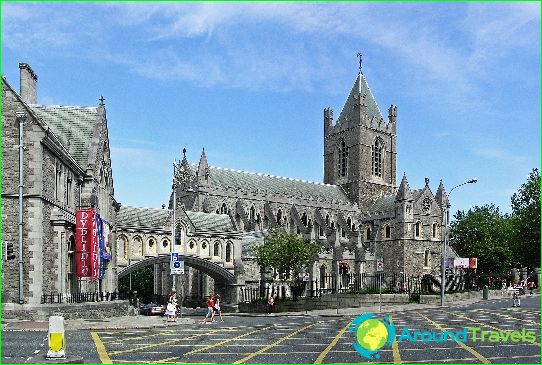 The capital of Ireland, Dublin, is quite small when compared with the capitals of other European countries. But in Ireland it is the largest. The city where Jonathan Swift and Oscar Wilde were born will surprise you with its «non-capital» life. There are no usual skyscrapers here. On the contrary, the city authorities returned its historical face to the city, restoring old buildings and decorating the streets with parks and gardens..

What is a must visit? There are a lot of places. Choose any.

The largest cathedral in the country, built exactly on the spot where, according to legend, Saint Patrick baptized the people of the country. It dates back to the XII century. Not far from the cathedral, you will see a broken flower bed. There used to be a well here, the water of which was used during the sacrament..

The cathedral performs two functions simultaneously. Firstly, this is an ordinary church with all the necessary attributes. Secondly, it has its own museum exhibition dedicated to Jonathan Swift, the author of Gulliver's famous travels. The writer in the 18th century was the rector of the church. Here he found his peace. You can see his death mask.

This is where the famous dark beer is brewed «Guinness». By visiting the museum, you will be able to get acquainted with the ingredient composition and, finally, find out what gives it such a dark color and specific taste. Nearby is the home of Arthur Guinness, the man who founded the brewery.

The most interesting thing for which the trip to the museum is started is the tasting, which is held on the sixth floor. Dark beer slowly pours into mugs, and when a huge head of froth grows over it, it is handed to you. Finding a museum is easy. Go for a walk from the city center. Walk what is called the smell, and it will tell you the right direction..

Built in the 13th century, the castle has always been a hotbed of evil for Dublin residents. And for a reason. It was occupied for more than seven centuries by the governors of England, whose colony was Ireland for many centuries..

In the modern appearance of the castle, practically nothing has survived from its historical appearance. Perhaps the Record Tower, but it also has a superstructure dating back to the 19th century. The castle was returned to Ireland only in 1922. Today it houses the Royal Chapel, a treasure vault and a chic restaurant. During official receptions, which are not uncommon here, the castle is closed for visits.

Officially, this steel needle is called «Monument of light» and is the highest monument on the entire planet. The 120-meter spire is visible from all points of the city in the evenings thanks to special lighting. It even serves as a beacon for returning revelers..