Articles about Ireland
by Alexis 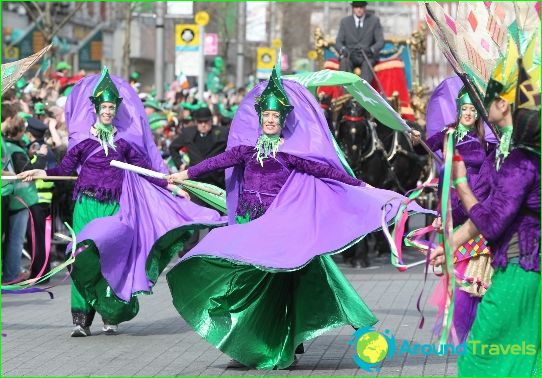 Geographically, Ireland is located next to the UK. But, nevertheless, the country developed completely independently and has its own culture and language. That is why the holidays in Ireland are strikingly different from the English ones, although the influence of Foggy Albion is still felt.

One of the funniest holidays celebrated not only by the indigenous people, but by the rest of the world. These days, anyone can become a real Irishman, if only they wish..

On this day, the cities of the country turn green in the literal sense of the word. People paint their faces in the colors of the Irish flag or paint shamrocks on their cheeks. Not just bouquets, but real armfuls of blooming clover decorate the hats and costumes of the townspeople. Another feature of the costume on this day is the bright red wigs and rich green color of the clothes. In addition, you can taste green sweets in the form of a clover leaf, and even green beer..

The name of the saint is surrounded by a lot of legends. It is generally accepted that Christianity came to Ireland precisely from his submission, explaining to the inhabitants of the country what the Holy Trinity is by the example of an ordinary meadow clover.

The motto of the holiday is the word Craic, which can be translated as « fun and enjoyment». The cities are turning into a single festive square, where residents drink beer pouring in a river and dance an amazing dance «kayleigh». This action looks very impressive. The dancer's torso is completely motionless, while the legs dance intricate knees..

The main festive event is the parade. And if you see a bright carnival in Dublin, then in Limerick you can listen to brass bands that will walk along the main streets of the city.

The capital of Ireland annually on June 16 gathers at its guests fans of the writer James Joyce, in particular, admirers of his book «Ulysses». The book tells only about one day in the life of Leopold Bloom, the main character of the novel, but the holiday is dedicated to him. Many people flock to the capital who want to walk along the streets and alleys along which the characters of the book walked..

Bloomsday is four days of book reading and special city walks that show Dublin through the eyes of the writer's characters.

Puck Fair is the oldest Irish fair, the days of which are becoming an unusual holiday. The streets of Killorglin, where it is located, are filled with street musicians and dancers during the day, and are decorated with fireworks at night..

The most unusual event is the coronation of a wild mountain goat, which falls on the opening day of the fair. The animal not only becomes the king of the holiday, but also gets its queen. One of the women present at the celebration is chosen for her role..

But why a goat? There are many legends. According to one of them, the goat was frightened by the Swedes, who especially vexed Ireland with their predatory raids. People managed to organize defense, and they began to show such honors to the goats. But historians believe that the roots of the custom go deep into the past. The goat has always been revered as a symbol of fertility..

The goat is stripped of his crown on the last day of the fair and is released. All events, of course, are accompanied by noisy fun and dancing.