Articles about Milan
by Ashley 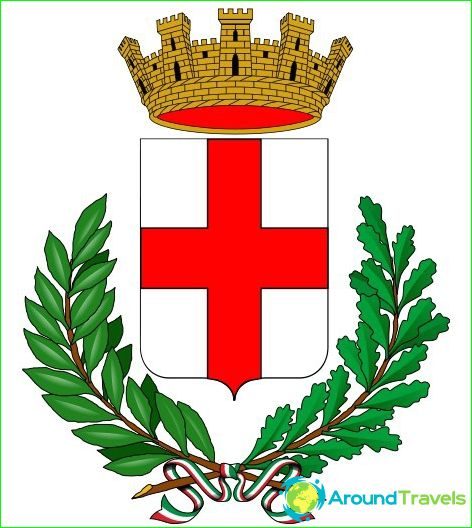 Coat of arms of Milan

Milan is the second largest city in Italy and its main financial, economic, industrial, cultural and scientific center, as well as one of the leading capitals of world fashion and design.

It is believed that Milan or, as it was called in ancient times, Mediolanum was founded by the ancient Celtic people of the Insubras, who settled in the lands of Cisalpine Gaul around 400 BC. In 222 BC. the city was conquered by the Romans, and in 286 AD. became the capital of the Western Roman Empire. In 313, the Roman Emperor Constantine in Milan proclaimed the so-called Edict of Milan on the freedom to practice the Christian faith, which was undoubtedly an important step towards the establishment of Christianity as the official religion of the empire. In 402 the city was besieged by the Visigoths and the capital was moved from Milan to Ravenna. In subsequent centuries, Milan was under the control of the Huns, Ostrogoths, Lombards and Franks, later becoming part of the Holy Roman Empire.

The heyday of Milan

In the Middle Ages, largely due to its strategic position, which made it possible to control the trade routes between Italy and Central Europe, passing through the alpine passes, Milan actively developed and soon became a large commercial center, proclaiming itself in 1045 as an independent state (commune). In 1162, after a nine-month siege, the city was captured and practically destroyed by the troops of the emperor Frederick Barbarossa. By 1167 Milan was rebuilt and took over the Lombard League. After the defeat of the imperial army at the Battle of Legnano (1176), Milan, along with other cities of Lombardy, finally gained relative independence from the Holy Roman Empire. The Peace Agreement, better known as the Peace of Constance, between Frederick Barbarossa and the Lombard League was signed in 1183.

By the 13th century, Milan had become one of the richest and most influential cities in Europe. This period in the history of the city was marked by a confrontation between the two eminent families of Torriani (Guelphs) and Visconti (Ghibellines). At the beginning of the 14th century, the Visconti won the final victory, and in 1395 they founded the Duchy of Milan, of which Milan became the capital. In 1450, the Duchy was headed by the House of Sforza, which played an important role in the development of Milan as a major cultural center and one of the leading cities of the Italian Renaissance..

Since the early 16th century, Milan has been dominated by the French, Spanish and Austrians. In 1859, after the Battle of Salferino, Milan, along with other cities of Lombardy, became part of the Kingdom of Sardinia, which was transformed into the Kingdom of Italy in 1861 and soon became a major financial and industrial center. During the Second World War, the city was repeatedly bombed and thoroughly destroyed, but quickly rebuilt.

Today Milan is one of the most interesting and visited cities in Europe. Numerous museums, galleries, theaters, architectural monuments and, of course, boutiques of the world's leading brands attract millions of tourists from all over the world. Among the cultural events of an international scale, held annually in Milan, the most interesting are the famous Milan Fashion Week and the largest Milan Fair of its kind. The Milanese opera house "La Scala", which opened its doors to connoisseurs of art back in 1778, is also world-famous..