Vilnius - the capital of Lithuania 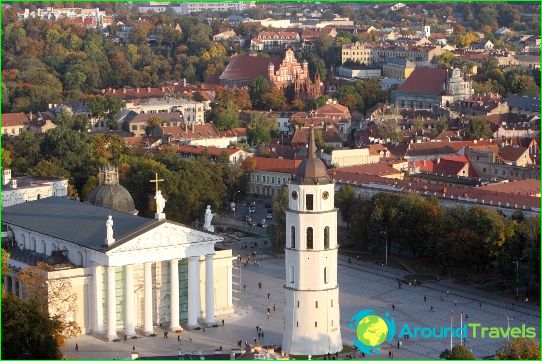 The capital of Lithuania, the city of Vilnius, is truly multifaceted. Every visitor to the capital will find exactly what he is looking for. For some, this is the active life of the city, for others - numerous cultural events and, of course, the opportunity to establish the necessary business contacts. At the same time, everyone is unanimous in the opinion that Vilnius is cathedrals and churches, the charm of the Old Town, cozy street cafes and huge parks.

A miniature church is a visiting card of the capital. For the construction of the facade, 33 types of bricks were used, and the building itself was built in the late Gothic style. The name of the architect who created the architectural masterpiece remains unknown to this day.

The interior decoration of the temple practically does not differ from the accepted standards, with the exception of a small detail - a small gallery connecting it with the Bernardine Church, which is located nearby.

Across the road from the temple is a miniature park where you can lie on the grass and admire its gothic lace to your heart's content..

The tower is located on the slope of the Castle Hill and was built in the same Gothic style. Visually, it is a three-story building with an octagonal shape..

It was named after the Lithuanian prince Gediminas, who is the founder of the city. Scientists suggest that it was his order that gave life to the tower. But there is evidence that the building already existed in the 13th century. Which data is correct is not important. The tower has always played a major role in the fate of the city, since it was part of a defensive fortress. And only she alone was able to survive after the war of the 17th century. Today there is a museum exposition dedicated to the history of the capital..

Gediminas Square (as it was called before) is the central square of Vilnius. To get here, you need to go to the historical center of the capital, straight to the Cathedral of St. Stanislaus. All festivities, concerts, political gatherings, etc. are held on the Cathedral Square..

This place became a square relatively recently, in the 19th century. Previously, ordinary houses and the Lower Castle were located here. After the fortress was demolished, the territory expanded significantly and became known as the square. There are many attractions nearby, such as the Hill of the Three Crosses and Gedemin's Tower.

The Old Town is located on the left bank of the Neris and is the oldest part of the Lithuanian capital. The area covers Castle Hill, Town Hall and Cathedral Squares, as well as several adjacent quarters.

The formation of the historical center falls on the medieval period, and therefore the variety of architectural styles that you will see here is simply amazing. This lace is Gothic, and modern, and classicism, and, of course, baroque pretentiousness..