Home › Articles about Maldives › Airport in Male: scheme, photo. How to get to Male airport

Airport in Male: scheme, photo. How to get to Male airport

Articles about Maldives
by Amber 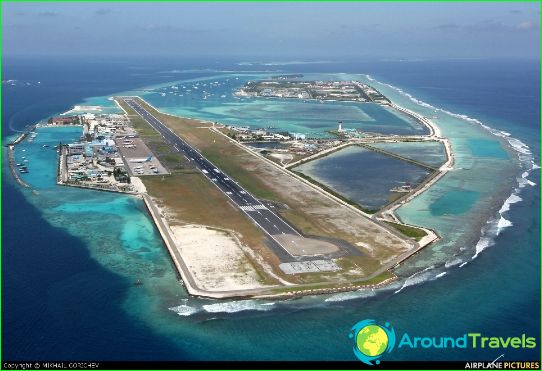 Male airport began operations in October 1960. Its first runway was made of steel plates and was just over 900 meters long. Four years later, it was decided to replace it with an asphalt.
Interestingly, the removal of the old runway was carried out on a competitive basis - 4 groups of local residents removed it at speed, and the winner received 1,000 rufiyaa.
The official opening of the new runway was in April 1966.
In 1981, the airport received international status and officially became known as Male International Airport.
In the summer of 2011, the airport was given a new name - the airport. Ibrahim Nasir. Ibrahim Nasira was the second President of the Maldives and was the initiator of the construction of this airport.

Male airport has 2 terminals, the first of which is responsible for international flights, and the second for domestic. In the terminals, passengers will be able to receive only the most necessary services, without any frills. Post office, bank branches, ATMs, pharmacy and first-aid post.
In addition, there is a luggage storage room on the territory of the terminal, the cost is $ 3 per day. Of course, you can't do without the Internet.
Also, passengers can visit duty-free shops, cafes and restaurants.
There is a separate superior lounge for business class passengers.

The Maldives is fully aquatic, so the main transport here is water or air (seaplanes).
Every 10 minutes a ferry departs from the airport, which will take a passenger to the neighboring island for $ 1..