Articles about Maldives
by Amber 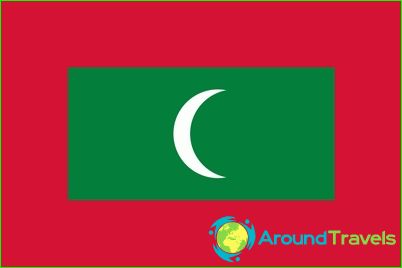 The national flag of the Republic of Maldives was officially approved as a symbol of the country in July 1965, when the country gained independence from Great Britain..

Description and proportions of the flag of Maldives

The fabric of the Maldives flag is a bright red rectangle. The length and width of the Maldives flag are related to each other in a 3: 2 ratio. In the middle of the red field, a green rectangle is drawn on the flag, equidistant from the edges of the flag. The length and width of the rectangle are equal to four and two distances to the edges of the red panel, respectively. In the center of the green field there is a white crescent, the horns of which are turned towards the free edge of the flag.
The red field of the Maldives flag is a tribute to the memory of the heroes of the past and the future of the country, who did not and will never put their own security more important than the freedom of their homeland. They gave and will give their lives without hesitation for her prosperity and independence. The greenery at the center of the Maldives flag is associated with the endless number of palm groves on the islands. These trees have always been revered by the Maldivians as a source of well-being and food. The crescent moon on the flag of the Maldives reminds of the main religion practiced by the inhabitants of the country, Islam.
The national flag of the Maldives is usually used on water and land for all state ceremonies and civil needs..
The flags of the Maldives are also depicted on the emblem of the country, which is an image of a coconut tree with a golden crescent and a five-pointed star in its background. It serves as a reminder of Islamic values ​​and the importance of palm trees in the life of the islanders. On the sides of the palm tree, the Maldives emblem depicts two flags of the state, emerging from a common base. A white ribbon with the name of the country inscribed on it closes the composition at the bottom of the emblem..

History of the flag of the Maldives

The very first state flag was used on the islands until the 20th century. It was a red cloth that looked great and was noticeable against the blue sea surface..
Then a crescent moon appeared on the flag of the Maldives, which was brought by representatives of the Ottoman Empire. Initially, its horns were directed towards the shaft, which was not recognized by Byzantine standards. The symbol that came from Constantinople was soon turned in the opposite direction, and the luff of the Maldives flag was no longer covered with white and black stripes..