Articles about Nepal
by Alyssa 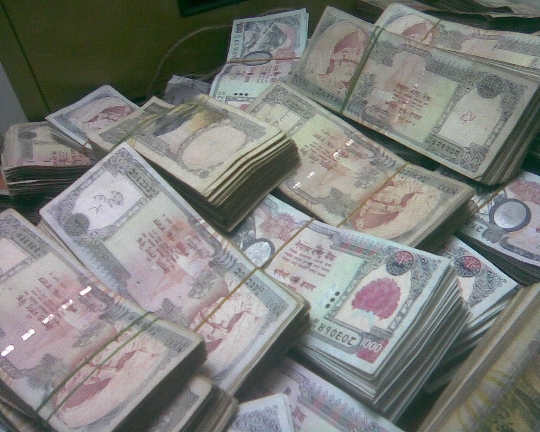 Nepal's official money is «Nepalese rupees» (NPR is an international designation). In circulation you can find both banknotes of various denominations, and coins - rupees and paisas, but they have almost ceased to be found.

Since the economy of Nepal is heavily dependent on India, the Nepalese currency is also highly dependent on the Indian rupee, an approximate ratio of 1.6 / 1. Their official rate is determined daily by the state-owned bank Nepal Rastra Bank..
In most large cities of Nepal, it is possible to pay with foreign currency, but it will still not work to do without the national currency. In taxis, small cafes and small shops, and especially in the outback, more and more often they refuse to accept money from another country.

Currency is exchanged in banks and special licensed exchange offices, which are almost always open daily from 9 am (in banks, the day off is Saturday). You can also make an unofficial exchange of currency - on the black market, the rate is always 10 percent higher, but no information is given there. Thanks to the developed bureaucracy, he acts almost openly and very actively.
Also, most of the traveller's checks can be exchanged at large banks in Pokhara and Kathmandu, but with direct payments they are unlikely to be used..
When exchanging, it is recommended to take as many small bills as possible, since often merchants, rickshaws or taxi drivers simply will not be able to give change when paying for goods or services. Also, you should not take dirty or torn bills - they can easily not be accepted for payment..
The import of currency into Nepal for foreigners is not limited, but amounts exceeding 5 thousand US dollars are subject to mandatory declaration.

More recently, paper money appeared in this state, and now it is almost impossible to find Nepalese coins anywhere. Indigenous people rarely use them, and more often keep them at home. All banknotes are decorated with a portrait of King Birendra Bir Bikram, who was killed by his own son in 2011, and the new banknote already depicts the new Nepalese king, the brother of the deceased. In general, the banknotes look rather pale, with abstract drawings..
If the question arises, what currency to take to Nepal for exchange, then most of the world's money is quite easy to exchange there: be it Japanese yen or US dollars. But it is important to remember that due to fear of counterfeiting, many banks may refuse to exchange US $ 100 bills and Indian rupee 500 notes. This must be taken into account when choosing which currency to take to Nepal.