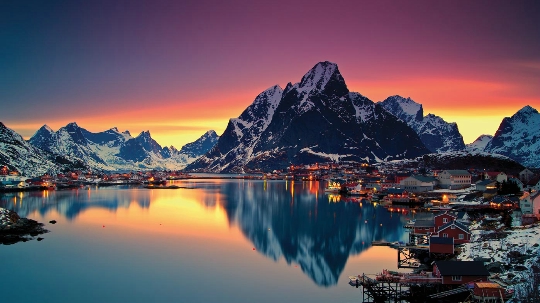 The territory of Northern Norway is almost entirely in the Arctic Circle. Therefore, the local nature is unique. Despite the peculiarities of the geographical location of the region, in some parts of it the summer air temperature is +27 degrees.

Attractions of the region

The north of Norway is a place that the Norwegians themselves designate as an eternal summer day, since from mid-May to August the sun does not set below the horizon. You can travel around the region by car or bus. From Oslo you can get to Tromsø or Bodø by air. To navigate the Norwegian Sea past the fjords and the Lofoten Islands, it is best to take a liner in Bodø. It is the main town in Northern Norway and the capital of the county of Nordland. This beautiful town is home to the Aviation Museum, as well as the Saltstraumen Maelstrom, where large-scale craters form. Bodø is the starting point for exploring Northern Norway. You can get here from Oslo by plane in 1 hour 20 minutes.

In the western part of the region, in the Norwegian Sea, there is an archipelago - the seven Lofoten Islands with a population of about 24 thousand inhabitants. The warm Gulf Stream, which is located nearby, determines the mild coastal climate on the islands. It has cool summers and not very cold winters. The average air temperature in January is -1 degrees. The hottest months are August and July, when the air warms up to +12 degrees. The polar night on the islands is observed from early December to January 6.

Northern Norway is located at the same latitude as Siberia, Greenland, Alaska, but the climate in the north of Norway is milder. It happens that on summer days the air temperature reaches +30 degrees. In this area of ​​the country, gently sloping shores and steep cliffs are replaced by sandy beaches. The most beautiful landscapes can be seen in the area of ​​the villages of Rheine and Henningsvär. Natural landmark of the islands - Trollfjord, where killer whales live.
The northernmost and largest province of the country is Finnmark. Its main attraction is the extreme point of the mainland Europe, located at the North Cape. There is a tourist observation deck, from the height of which you can admire the edge of Europe. The province of Troms has an unusually picturesque nature. The coastline is characterized by a varied landscape. There are two of Norway's largest islands in this province. The inaccessible cliffs of these lands attract fans of rock climbing and extreme sports. On the territory of Troms there are numerous reservoirs where good fishing is possible. Arriving in the province, travelers observe the midnight sun from May 20 to July 22. Polar nights in Troms begin on November 20 and end on January 21. From early autumn to mid-spring, you can see the northern lights here.

North of China - cities and resorts ...