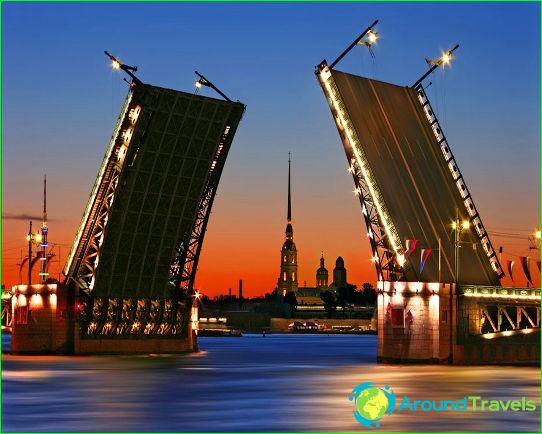 A large number of architectural monuments and historical sites are concentrated in the northern capital of Russia, and therefore it is hardly possible to see the whole of St. Petersburg in 2 days. But it is quite possible to include the best palaces, bridges, museums and cathedrals in the program of even a two-day excursion..

City of hundreds of bridges

Peter is ready to demonstrate to the amazed public 580 bridges over rivers and canals, but tourists usually have time to see only the most significant and unique ones. Two dozen bridges in St. Petersburg belong to the category of drawbridges. This is done so that ships can pass the rivers unhindered at night..
The main drawbridge of St. Petersburg is the Palace one. It connects the Admiralteisky and Vasilievsky Islands, separated by the Neva. His spread wings are one of the symbols of the city. No less beautiful is the suspension bridge across the Griboyedov Canal, known as the Lion. Four sculptures of lions, cast from cast iron, adorned the crossing in the first third of the 19th century.
At about the same time as the Lion, the Egyptian bridge across the Fontanka was built in the city, the bright dominant of which was the sculpture of the sphinxes. This crossing is the invariable hero of many films, the events in which take place in St. Petersburg..

Religious buildings belonging to more than forty confessions live peacefully in St. Petersburg, many of which are real examples of building art. A striking representative of this list is the cathedral city mosque. One of the largest in the Old World, located to the north of all others in the world, the St. Petersburg mosque is distinguished by its special grace and luxurious decoration. Its dome is made of porcelain and sparkles with turquoise in any weather. The craftsmanship of interior decoration and external details is in no way inferior to the famous temples of Central Asia.
One of the most famous Orthodox cathedrals in the northern capital, which is worth seeing in St. Petersburg in a day, is the Savior on Spilled Blood. It was erected at the end of the 19th century on the site of the fatal wound of Emperor Alexander II..
The temple stood in the woods for many years and was restored, and today guests of the city and Petersburgers can appreciate its luxurious decoration. The chapters of the Savior on Spilled Blood are made of enamel with true jewelry subtlety, and the floors are inlaid with inlaid marble ornaments. Mosaic panels and jasper trim complete the impression, and the temple seems not just beautiful, but luxurious.

And in St. Petersburg in 2 days you can see the only Buddhist monastery in this part of the world, admire the chapel that once belonged to the knights of the Maltese order, and climb to the observation deck of the dome of St. Isaac's Cathedral, from where you get magnificent panoramic photos of the northern capital.