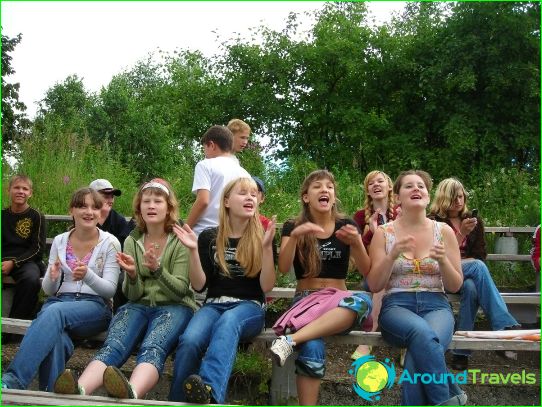 The climate of the Udmurt Republic allows you to rest on its territory in summer and winter. During the summer holidays it is hot here, and in the winter it is cold and there is a lot of snow. Many children's camps in Udmurtia are designed for year-round recreation for children..

How can you relax in Udmurtia

The center of the Udmurt Republic is the city of Izhevsk. It is sometimes called «Ural Petersburg». Izhevsk attracts tourists with its flavor. There are many monuments, museums and galleries here. Sanatoriums and health centers are located outside the city, where a good ecological situation prevails. Children's camps provide an exciting holiday experience. The authorities of Udmurtia allocate targeted funds for the development of children's tourism. In addition to the standard set of tourist programs, there are adventure routes for schoolchildren. Tourism in the Udmurt Republic most often has an independent character. The activities of tour operators are still developing. But vouchers to the best children's health centers can be purchased at any travel agency.

The territory of Udmurtia attracts fans of wildlife, fishermen and hunters. After all, most of the republic is occupied by dense forests. A variety of game is found there: hazel grouse, partridge, wood grouse, black grouse. Their animals can be found fox, badger, wolf, ermine, etc..

Rest in Udmurtia means walking around untouched places by civilization. Popular activities include water sports, speleotourism, horseback riding, skiing and mountain tourism. In the camps, active rest with a visit to the woodlands is designed for high school students. Children of primary school age are offered mainly games on the territory of the health institution. Children's camps in Udmurtia offer ecological sessions, within the framework of which many exciting activities are held.

The republic has a rich historical and architectural heritage. A huge number of museums are dedicated to the preservation of the traditions of the indigenous population. Tourists are happy to travel to the ancient architectural monuments of Udmurtia. There are old wooden houses decorated with carvings, stone temples and many other interesting objects..

In summer, tent camps are in demand. They are placed in natural conditions. When organizing such camps, great attention is paid to the safety of children. The guys live in tents among the purest nature. The main tasks of the tent camp are recreation and health improvement of schoolchildren, strengthening their health, acquiring the skills of living in nature, going in for tourism and sports.

Photos of children's camps in Udmurtia

Taxi in Thessaloniki - prices, order. How ...