Capital of Sweden: map, photo. What is the capital in Sweden?

Articles about Stockholm
by Amber

Stockholm - the capital of Sweden 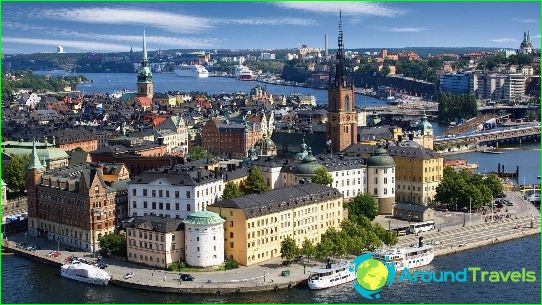 The capital of Sweden, Stockholm looks pretty unusual. Colorful houses, as if painted by a child, are tightly pressed against each other. And if you wish, you can take a walk on the roof, like the world famous Kid from Astrid Lindgren's fairy tales.

It was erected on the site of a medieval castle that burned down in 1698. The new house for the royal family took a long time to build and even by the time of the housewarming, which took place in 1754, was only partially ready. The castle served ten more kings who ruled the country. Today, the residence of King Carl Gustav XVI is located here..

The old town is spread over three islands. Stadsholmen is the largest of all. It was on it that the city was founded, therefore the main number of attractions is located in this place..

A standard guided tour of the historical center of the capital includes the Royal Museum, the Nobel Museum and other interesting places. After wandering around the local streets on your own, you can find exclusive attractions, in particular the Morten Lane. Believe it or not, its width is only 90 cm.

The center of the Old Town falls on one of the oldest squares in Stockholm - the Big Square. King Christian II, who reigned in the 16th century, in 1520 «drowned» her blood. A mass execution was carried out here, known to history as «Stockholm Bloodbath».

A small and very cozy space of the square since the founding of the future capital served as a place where her life was concentrated. Here, shopping arcades were unfolded and meetings were held..

Almost all houses facing Stortorget have retained their original appearance. There are narrow houses hidden near the academy, the façade of which is decorated with unusual forged details. These are unkarslauts - special iron braces that were previously used to strengthen buildings. The masters of each era created them in completely different ways. So the blacksmiths of the Middle Ages made unkarslauts in the form of a letter decorated with monograms «NS», but the scissors are the work of craftsmen of the middle of the 19th century.

You can appreciate the beauty of the city from the height of a bird's flight by going up the town hall. Be sure to take a warm hooded jacket with you. Otherwise, the strong wind blowing here incessantly will not allow you to enjoy the mesmerizing views. Be prepared to stand in a long line and then climb narrow corridors for a long time.

the main «children» landmark of Stockholm. It is located on the island of Djurgården. Here you will meet the hero you read so much about as a child, and, of course, you will be able to purchase many cute trinkets..

Consider «Junibacken» a museum dedicated to Astrid Lindgren would be wrong. In addition to Carlson, here you will also see a funny family of Moomin-trolls from the fabulous Mummi-Dol and other equally interesting characters.

The main attraction of the museum is a journey on a fairytale train that will take you through all the fairy tales. The walk is accompanied by a fascinating story. Arriving at Villa Peppi, children are allowed to make some noise and play at full strength. A fly in the ointment in a huge barrel of fabulous honey - a long queue.