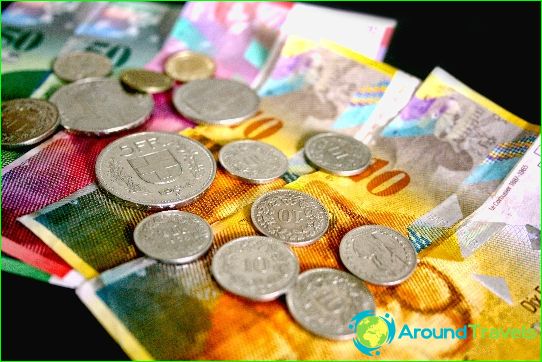 What is the national currency in Switzerland? The Swiss national currency is the Swiss franc. It is abbreviated as the first letters of the words Confederatia Helvetia francs (CHF). In circulation there are banknotes of 20, 50, 100, 500 and 1000 francs. One franc is 100 rappen (centimes). The Bank of Switzerland issues coins in denominations of 5, 10 and 20 rappen.

What currency to take to Switzerland?

It is the francs that are prevalent in circulation throughout the country. As for the euro, this currency is used much less frequently. Euros are often accepted by telephones, ticket offices at train stations, points of sale of goods in popular tourist places (Zurich, Bahnhofstrasse). Even if euros are accepted, change is almost always given in francs. Euro is popular on a par with francs exclusively in the capital. American dollars are not accepted as payment anywhere.

Other currencies are exchanged for Swiss francs at specialized exchange offices and banks. Bank branches are available from 8:00 to 16:00, less often - until 17 or 18 hours. Currency exchange points at the airport and train station in Zurich are open from 6:00 to 21:30 seven days a week. At other airports and train stations - from 8:00 to 22:00, less often - around the clock.
In addition, there is the possibility of currency exchange in almost every hotel. At the same time, the rate will not differ much from the bank rate. A good option would be if you exchange your currency for Swiss money prior to arrival. This is recommended for two reasons:

You can get money from an ATM in both francs and euros.

In accordance with Swiss laws, the country does not have any bans on the import and export of both local currency and foreign money. That is, it is permissible to import any currency into Switzerland in unlimited quantities..
VAT and its refund in Switzerland
7.5% - the value added tax. In restaurants and hotels, all taxes are included in the invoice amount. If you make purchases in the same store that cost more than 500 francs, there is an opportunity to get a VAT refund. To do this, you need to take a special from the seller «tax-exempt check». It is issued according to the passport. When leaving the country, VAT is paid on it at the airport bank. In some cases, the check is stamped. In this case, it must be mailed upon returning home. On the spot, VAT refunds can be obtained upon presentation of a passport.