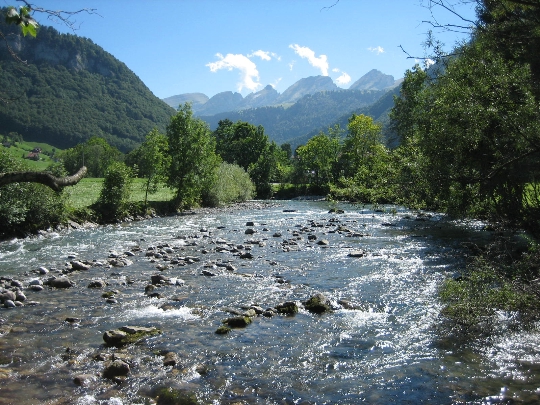 The rivers of Switzerland form a dense network on the map of the country and for the most part originate in the Alps..

The Rhine is one of the largest Western European rivers and flows through the territory of six states at once: Switzerland; Liechtenstein; Austria; Germany; France; The Netherlands. The Rhine begins in the Alps and ends in the waters of the North Sea. The total length of the channel is 1233 kilometers.

Royce is the fourth longest river in the country. The total length of the channel is 164.4 kilometers. Geographically, Royce passes through the lands of the cantons of Schwyz; Uri; Bumped; Nidwalden; Lucerne.

The source of the Rois is the confluence of two other rivers: Furkuruis and Gotthardreuis. This happens in the Urner Valley. To the city of Erstfeld, the river passes through the gorges, and then goes out onto the plain and flows calmly up to the place of confluence - Lake Flüelena.

The river is notable for its unhurried flow. There are many tourist attractions on the banks of the Royce. These are magnificent medieval buildings, and beautiful gardens, which in the autumn period simply amaze the eye with a riot of colors. Royce is great for sightseeing walks. Unhurried boat trips are especially in demand.

The river bed is entirely in Switzerland and reaches a length of 259 kilometers. Are - left tributary of the Rhine - begins in the Bernese Alps.

In its upper reaches, the Are is a typical mountain river. On its way, Are passes through two lakes - Brienz and Thun. On the river there is a waterfall (Gandek), forty-six meters high. On the banks of the river there are cities: Bern; Solothurn; Aarau.

One of the most interesting places in the river is the Are gorge. Its length is only one and a half kilometers with a depth of one hundred and eighty meters. In one of the places the width of the gorge does not exceed one meter. A convenient path has been laid along the bottom of the gorge, along which hundreds of tourists stroll every day, admiring the milky water.

The river passes through the territory of Switzerland and France. The source of the Rhone is the Alps, the slopes of the Rhone glacier. Here, numerous streams gradually merge together, forming a river. The Rhone passes through Lake Geneva and ends in the Mediterranean.

Rhone passes through the territory of many large cities: Geneva; Brig; Lyon and others. The banks of the river are extremely picturesque. This is why Rona is popular for walking..

The river runs through the town of Bad Ragaz and is considered a vibrant local landmark. The source of the river is the Glarusian Alps (Sardona Peak), and then, making a relatively short journey, flows into the waters of the Rhine. On its way, the river forms two lakes - Gigerwaldsee and Mapraggsee.