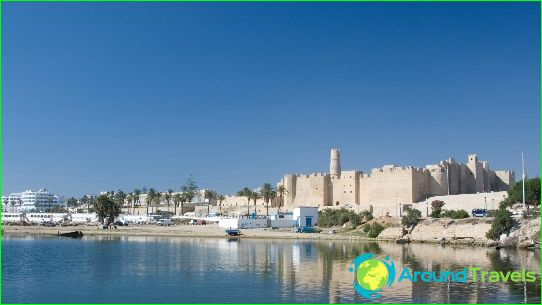 Located in the northern part of the African continent, Tunisia is famous as a beautiful Arab resort with sophisticated European service and a high level of hotels. The flavor of an oriental fairy tale here is intertwined with the modern achievements of the resort business, and a whole army of animators is responsible for the comfort and various entertainment of tourists on the beach. The only and inimitable sea of ​​Tunisia is the Mediterranean, and thousands of guests of the small North African country never tire of admiring its beauty..

The sea in the middle of the Earth

This is how the name of the water basin washing the northern and eastern borders of the state of the Republic of Tunisia can be translated from Latin. For the first time the name Mediterranean was given to him by the writer Gaius Julius Solin, who became famous in ancient times for his work «About worthy of memory», created in the IV century and dedicated to the author's geographical research. In the monograph, among other things, the answer was given to the question of which sea washes Tunisia, and even the constituent parts of a huge reservoir were highlighted.
Today the Mediterranean basin includes:

And in the Mediterranean itself, several more inland seas are distinguished, for example, the Adriatic, Ligurian and Aegean.

What are the seas in Tunisia?

There are no other seas besides the Mediterranean in the country, however, the enjoyment of a beach holiday in the Mediterranean resorts is incomparable. The water temperature in Sousse, Hammamet or Monastir in the summer months reaches +27 degrees, and pleasant sea breezes make it easier to endure the heat even during the peak season.
Another undoubted plus to the Tunisian vacation is thalassotherapy. The Mediterranean Sea not only provides opportunities for swimming, but also allows you to use its natural ingredients for the treatment and care of the skin of the face and body. With the help of healing algae and mud in the resorts of Tunisia, you can get rid of some skin diseases and improve metabolic processes, activate blood circulation and saturate the body with oxygen, get rid of cellulite and strengthen muscles.
Thalassotherapy manipulations at sea in Tunisia are shown to people whose lifestyle is far from active, and whose metabolism has slowed down due to chronic fatigue syndrome. At the same time, it is not at all necessary to fly to the resorts of Tunisia in summer: even in autumn, the sea temperature allows short swimming, and in the winter months spa procedures become especially pleasant in beauty centers on the coast.

Photos of the Tunisian coast