Articles about Turkey
by Ashley 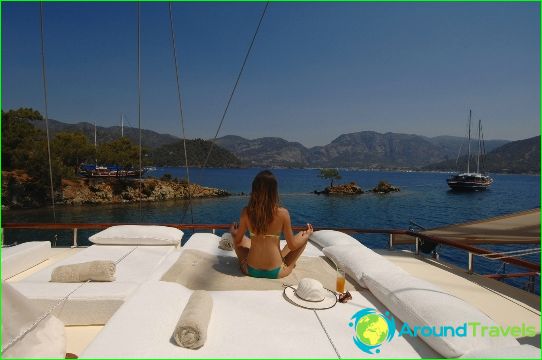 Familiar Turkey has faithfully served Russian tourists as a beach resort for more than a decade. It would seem that all the beaches have been explored, the sights have been examined, and the national dishes have been tasted and the country no longer arouses its former interest. But for those travelers who prefer unconventional solutions, there is such a type of vacation as cruises in Turkey. It is from the board of the ship that you can look at familiar things in a new way, and everyday vacation entertainment in this format takes on fresh bright colors..

The absolute majority of Turkish port cities can be called real stars in the tourist horizon. Noisy and diverse, bright and original, welcoming guests with aromas of spices and strong coffee, the cities of Turkey offer to walk through their narrow medieval streets and immerse themselves in an atmosphere of adventure and mystery:

At a sprint pace

While on vacation in Turkey, you can go on a boat trip for just a few hours. Sea cruises in Turkey are delightful fishing from a yacht, sightseeing excursions on boats on the Bosphorus in Istanbul, and stops in fishing villages for lunch or dinner..

Photos of cruises in Turkey