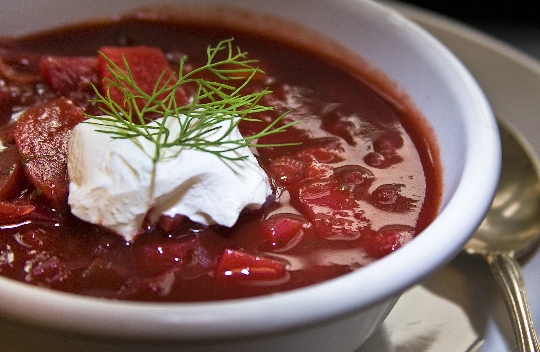 Ukrainian cuisine is not only diverse, but also complex - most dishes consist of many components, which are often subjected to several processing methods..

Lard is of great importance in Ukrainian cuisine - it is not only added to various dishes, but also consumed salty or sweet, with molasses. Perhaps one of the famous dishes of national cuisine is Ukrainian borscht, which is prepared from vegetables, seasoned with garlic, parsley and crushed bacon (usually served with donuts).

If we talk about meat dishes, then they are fried or stewed from beef, pork or poultry. Such dishes include various cutlets, roasts, cabbage rolls, lamb stewed with prunes, chops, zrazy with various fillings. Of fish dishes, there are crucian carp baked in sour cream, stewed pike with horseradish, carp stuffed with mushrooms and buckwheat, fish tortillas.

Another hallmark of Ukraine is dumplings - potatoes, sauerkraut, cottage cheese, berries are used as a filling..

If you want to taste Ukrainian cuisine, there will be no problems with the fulfillment of your desire in Ukraine: there are establishments with an ethnic interior, like village huts. Such establishments include, for example, the Puzata Khata chain.

In Kiev, you can visit "Spotykach" (guests are recommended to taste cherry dumplings, Kiev cutlets, honey cake with prunes; and on Fridays and Saturdays they will be pleased with live music), in Odessa - the restaurant "Dacha" (guests here are treated to eggplant caviar from Aunt Betty, borscht, jellied meat, cabbage rolls), in Lviv - "Seven piglets" (guests are offered to taste lard, baked pig, "Jellied tongue", dumplings in various fillings, mead).

Those who wish will be able to attend courses at the Culinary Workshop in Kiev (the level of culinary training does not matter): here you can learn how to cook red Ukrainian borscht, krucheniki with mushrooms, custard dumplings with salmon, red caviar and sour cream sauce and other dishes.