Articles about the Vatican
by Amber

Tours to the Vatican 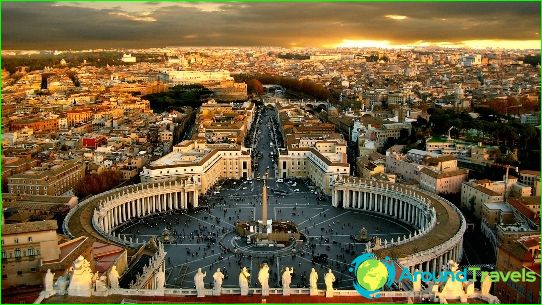 Less than half a square kilometer is occupied by the territory of this state on the world map, but its influence on the minds and hearts of millions of Catholics is truly enormous. The Vatican is home to the Holy See and the seat of the highest spiritual leadership of the Roman Catholic Church. Tours to the Vatican are annually made by millions of pilgrims and travelers who want to touch the greatest cultural values ​​concentrated on the territory of the world's smallest state.

Geographically, the Vatican is located in the Italian capital on the site of a sacred place for the ancient Romans. It is here that the tomb of St. Peter is located, over which the majestic and largest of the Catholic cathedrals of the planet was erected in the 16th-17th centuries.
The modern Vatican gained its right to exist in 1929, when the Mussolini government signed the Lateran Agreements, which settled the mutual claims of Italy and the Holy See..
As a result of the agreements reached, the total length of the state border of the dwarf state is 3.2 kilometers and part of these borders can be seen by the participants of the tour to the Vatican in the form of a chain of white stones laid out on the square in front of the cathedral..