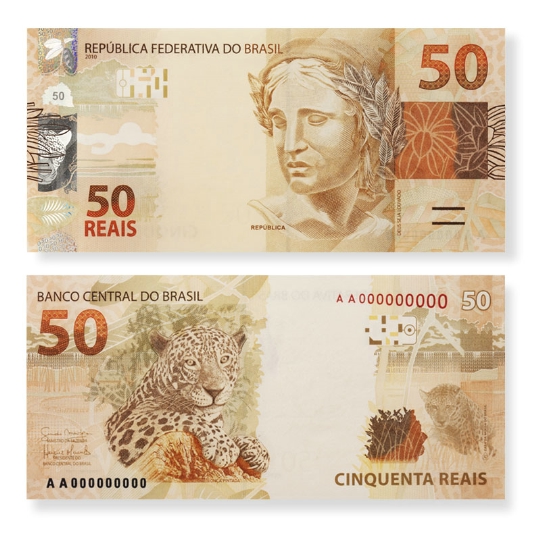 Brazilian money is calculated in Brazilian reais, with 1 real equal to 100 centavos. Despite the wide distribution of dollars and euros around the world, reais often catch the attention of the public, holding their mark with dignity in the international financial market. The obverse of all modern banknotes is decorated with the image of the sculpture "Republic", and the reverse with the indicated denomination of the currency displays various representatives of the country's fauna: jaguars, herons, turtles and other animals.
Today, you can pay for goods or services in Brazil with the following monetary units:

The history of the money turnover of Brazil

As you know, the Brazilian reals are quite interesting in that they were introduced into use quite recently by the standards of the human history of states - only in 1994. In the war and post-war periods from 1942 to the day of the emergence of the currency, the country experienced severe hyperinflation and a complete depreciation of existing money during 7 sharp drops in its value. And although the global crisis did not pass without a trace for Brazil, she was able to successfully overcome it by issuing a completely new banknote, which took its place in the global economy..
Each bill is distinguished by its design, which necessarily includes the image of one or another animal, made in bright colors. As for the coins, all of them are also designed in relation to their denomination. Commemorative coins (both from ordinary and precious metals) are special for the inhabitants of the country and are found less often than others, but they are of no less value. Coins of this type in 1 real differ from the others in their original design, thanks to which they often become a significant part of the collection of those who are fond of coins..

If you decide to visit a rather popular country among vacationers, you should know what currency to take to Brazil. In the event that you did not manage to acquire the necessary monetary units, you can always use the services of a bank to exchange the currency that you have available. Dollars and euros are especially popular due to their prevalence in the world..
Bank branches are open from 10.00 to 15.00-16.30 from Monday to Friday and are ready to provide their services for currency exchange in Brazil. Exchange offices located at airports usually work around the clock, seven days a week. Numerous post offices and even some shops are also an alternative..