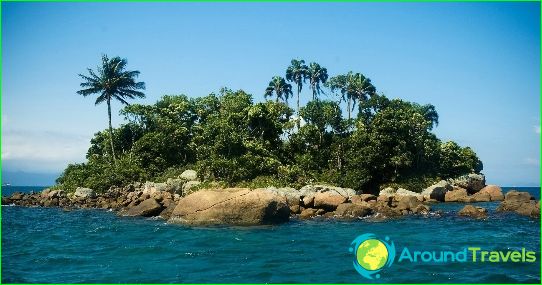 Brazil occupies the northeastern part of South America. It shares borders with Venezuela, Guyana, French Guiana, Colombia, Suriname and other states. The shores of the country are washed by the waters of the Atlantic Ocean. Its coastline stretches for 7.4 thousand km. The islands of Brazil form a number of archipelagos such as Saint Pedro and São Paulo, Fernando de Noronha, Trinidad and Martin Vas, Rocas. The country occupies a huge territory, so it is considered the largest in the tropical zone. Its area is 8,511,065 km2. sq. The water surface area is approximately 55,455 square meters. km.

a brief description of

An exotic and dangerous island is the Snake Island. It is small in size, but teeming with poisonous snakes. The venom of these spear-headed snakes causes the immediate death of living tissues. For 1 sq. m of the island's area there are 5-6 poisonous individuals.

The São Pedro y São Paulo archipelago is located northeast of Fernando de Noronha and is 625 km away from it. The islands of this archipelago are uninhabited. Administratively, they belong to the state of Pernambuco. There are only 15 rocks and small islands in this area. There are no sources of fresh water on them. The lands of the islands are almost barren. However, they serve as a habitat for a variety of seabirds and crabs..

The country distinguishes areas with an equatorial and subtropical climate. High humidity is always observed in Rio de Janeiro. The coolest month is July. From April to September it rains in the country. The dry season lasts from August to December. The Brazilian coast can be visited at any time of the year. There is winter only in the extreme south of the country. At this time, the air temperature sometimes drops to +10 degrees and below. Brazil is characterized by hot weather. The average monthly temperature ranges from +16 to +29 degrees. The temperature is slightly lower in the highlands in the east of the country. The western Amazon has a humid equatorial climate.

The islands of Brazil are renowned for their wealth of flora and fauna. In terms of the number of species of animals and plants, the country ranks first in the world. Many animals are endangered.