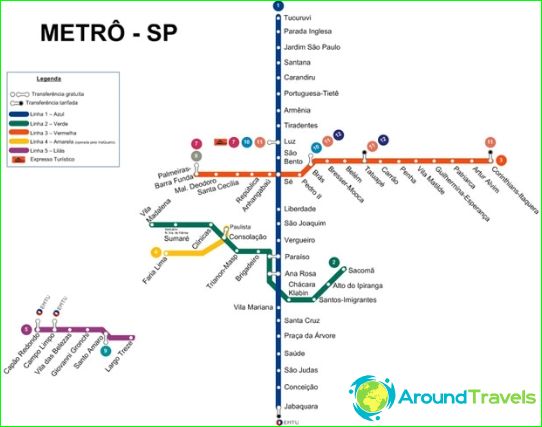 The Sao Paulo Metro was opened in 1974 and is today the largest metro in Brazil, as well as the largest in terms of passenger traffic (about 3 million people per day) in South America. By the beginning of 2014, the São Paulo metro consists of 5 lines and 68 stations with a total track length of 74.3 km. The Sao Paulo Metro was named America's Best Metro at the MetroRail 2010 Industrial Conference.
The first project for a metro system in São Paulo was proposed in 1927 by engineer Norman Wilson, who proposed a plan to reorganize the city's transportation system with an emphasis on public rail transport. His idea, as well as other projects. Proposed for half a century, they were categorically rejected by the municipality, and for many years the bus served as the main city transport.
On August 31, 1966, the Grupo Ejecutivo del Metropolitano (GEM) committee was formed to organize an international tender for the construction of the subway, which was won the following year by the HMD consortium (German company Hochtief & DeConsult and Brazilian Montreal), which began geological exploration and design of the first stage of the metro, length seventy kilometers.
The construction itself began in 1968 with the North-South line, now Line 1 (blue). A test launch took place in 1972 on the route between Jabaquara - Saúde stations, and passenger traffic began in 1974.
The São Paulo Metro is open from 4:40 am to 1:00 am. Metro lines differ in color and number: Line 1 is blue, Line 2 is green, Line 3 is red, Line 4 is yellow and Line 5 is purple. The São Paulo Metro provides passengers with the opportunity to use intercept parking by providing E-Fácil parking tickets. In order to promote the use of ecological transport, the São Paulo metro allows the carriage of bicycles in almost all parts of the network..