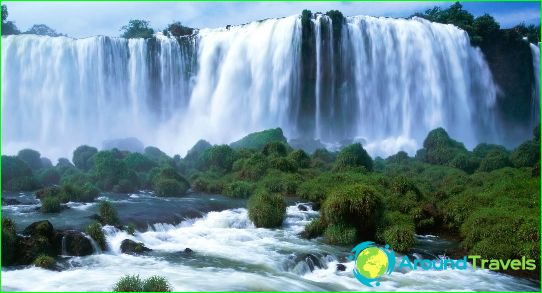 Brazil is an interesting country, a journey through which can give vivid, special emotions. Where to visit for every tourist who wants to enjoy the trip?

Bahia is located in eastern Brazil on the Atlantic coast. The administrative center is the city of Salvador, recognized as one of the most unusual and colorful in all of Brazil. Here you can no longer notice the former greatness, but the atmosphere of colonial Brazil has survived to this day. Salvador is usually divided into upper and lower cities. The upper city is famous for the old quarter of Pelourinho, which is the center of state, administrative and spiritual life. The lower town is famous for its fortified forts, which must be seen in order to form a complete impression of Salvador. Visit one of the most colorful cities in Brazil.

The Federal District is a special administrative unit of the state, which includes the city of Brasilia. This district has existed since 1960 after the capital was moved from Rio de Janeiro to Brasilia.

The layout of the city of Brasilia is unique. If you take the opportunity to see the city architecture from a bird's eye view, you will notice that the streets and neighborhoods resemble a flying jet plane. The architecture is also admired not only by locals, but also by all tourists. Visit Brasilia to celebrate the eccentricity of the city.

Sao Paulo is the most populous economically developed state, which is located in the southeastern part of the state. Sao Paulo has the status of an administrative center. It is important to note that Sao Paulo is the largest city not only in Brazil, but also among all other states in South America..

Things to do in Sao Paulo if you plan a trip?

The provinces of Brazil are famous for their unusual culture and unique sights, so the trip is sure to be remembered for a long time..

Pictures of the provinces of Brazil