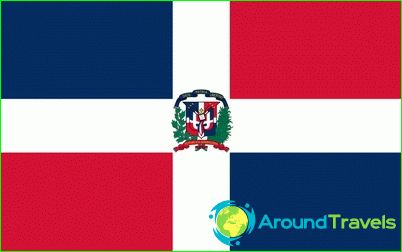 The flag of the Dominican Republic, approved in 1863, is its state symbol, like the coat of arms and anthem of the country.

Description and proportions of the Dominican flag

History of the Dominican flag

The Dominican Republic broke free of nearly three hundred years of Spanish colonial rule in 1821. Then the flag of the country was a red-white-yellow tricolor. Stripes of equal width were located horizontally on the panel.
Soon the territory of the modern Dominican Republic was captured by the neighboring state. To restore independence, now from Haiti, the patriots created a secret society, the symbol of which, in contrast to Haitian cult rites, was chosen by the Catholic cross. The society also received its own flag, which was invented by its head. It was Juan Pablo Duarte who later became the country's first legitimate president, and his flag received state status after the victory of society in 1844 in an uprising against the invaders from Haiti. There was a white cross in the center of the flag, the two lower fields were blue, and the upper ones were red..
A few years later, the coat of arms of the country was applied to the flag of the Dominican Republic, and the colored fields were arranged in a checkerboard pattern. In this form, it was finally approved in 1863 as a state symbol..