Home › Articles about Luxembourg › Capital of Luxembourg: map, photo. What is the capital city in Luxembourg?

Capital of Luxembourg: map, photo. What is the capital city in Luxembourg?

Luxembourg - the capital of Luxembourg 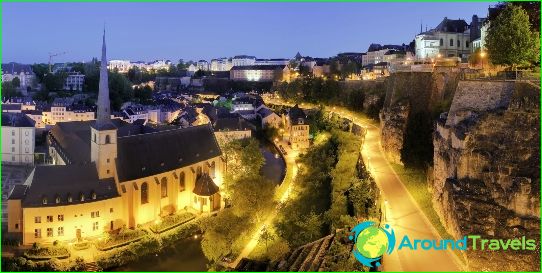 The capital of Luxembourg is the city of the same name, located at the confluence of two rivers. Small Petrus and Alzat meet here. The city occupies quite a lot of space and is divided into 24 districts, but only 4 of them are of particular interest to tourists..

Luxembourg can be rather conditionally divided into the Upper and Lower City. Due to the fact that rivers flow through its territory, there are numerous bridges in the city. In general, there are more than a hundred of them. The largest are the Duchess Charlotte Bridge and the Adolphe Bridge..

Grund, the second name of the Lower City, looks more modern. There are a huge number of banks, administrative buildings and breweries. Medieval buildings and fortress walls look surprisingly unusual against this background..

A favorite place for walking in this part of the capital is Arm Square. Here you can have a delicious lunch by going to one of the many restaurants, or take a run and significantly lighten your wallet in modern shopping centers..

The palace, as before, is the seat of the Grand Duke. The building is dated 1572. Initially, the town hall was located here, but in the 19th century, the building interested the Grand Duke, who ruled the country at that time, and it became the main residence of his family. A little later, another wing was added to the palace, where the personal rest of the family members was located. Today, the Grand Ducal Palace is a working residence. The Grand Duke and his family will live elsewhere.

The bridge is the unofficial symbol of the capital. It is he who personifies the independence of Luxembourg, being the main attraction of the city. The bridge has stood for over a century. The first stone at its foundation was laid in 1900. The official opening took place a little over three years later. At first, it was open to both cars and rail..

You can find it if you go to the southern part of the capital. The construction of the cathedral was completed at the beginning of the 17th century. Since the construction of the building took place during the period of the change of eras, the appearance of the temple contains both Gothic features and the softness of the Renaissance. Here you can admire the powerful choirs and sculptures. The crypt-tomb deserves special attention.

Numerous chambers and tunnels located in the depths of the Le Bock cliff, and there are the famous casemates. The first chambers were cut down in the 17th century - during the Spanish rule. Later, the underground passages were deepened and widened. The total length was 23 kilometers. In the 19th century, many casemates were dismantled, but 17 kilometers of tunnels remained intact. During World War II, they were used as a refuge by people fleeing the bombing..

This is a Catholic cathedral located on Fish Market Street. The temple is the religious shrine of the city. The style of the church is very unusual and successfully combines Baroque and Romanesque styles..

Count Siegfried in 987 gave the order to start the construction of the palace chapel, which was subsequently destroyed, restored and completed. The final appearance of the church was received in 1688, during the reign of Louis XIV. During the French Revolution, the building of the cathedral was the only one in the whole city that was not touched by the crowd..