Articles about Slovenia
by Amber 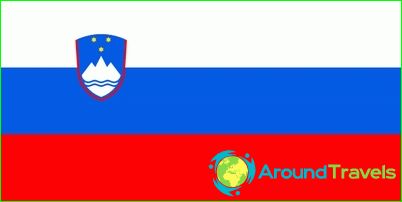 The flag of the Republic of Slovenia is a rectangle, the sides of which are proportional to each other in a 1: 2 ratio. The cloth is a classic tricolor, formed by three stripes of different colors and the same width.

The lower stripe of the Slovenian flag is red, the middle stripe is blue, and the upper stripe is white. The coat of arms of the Republic of Slovenia is located in the upper part of the cloth, which lies closer to the flagstaff. Its color scheme is white and blue, with gold. The coat of arms is a stylized image of the country's symbol and business card - Mount Triglav. Above its three peaks, woven with white threads, there are three golden stars, and the silhouette of the mountain is crossed by two wavy blue lines. These lines symbolize the rivers of Slovenia and the Adriatic Sea, to which the country has access. Since the Middle Ages, the stars have served as a symbol of the county of Celje, whose history serves as an example of steadfastness and courage for Slovenes. This county retained its ethnic Slovenian independence throughout the entire period of medieval conquests..

The colors of the Slovenian flag are traditional for many Slavic states. History has it that the Slovenian tricolor was first raised by the country's patriotic citizens in 1848. At that time, on the territory of the modern Republic of Slovenia, a national movement was developing with its center in Extreme for independence and sovereignty. The patriots borrowed the idea of ​​creating a national tricolor from the Russian flag, and during Slovenia's stay in the federal republic of Yugoslavia, a red star was added to the center of the banner.

In 1991, the collapse of Yugoslavia made it necessary for Slovenes to choose their own destiny. On June 25, a referendum was held in the country, in which the absolute majority of the country's residents voted for independence. On June 27 of the same year, the country's new national flag was raised for the first time in Ljubljana, proclaimed the capital. The red five-pointed star was removed from it and the coat of arms with the Triglav peaks was added.
Today, the Republic of Slovenia has been running a campaign since 2003, the main goal of which is to change the appearance of the state flag. The fact is that the civilian version of one of the official symbols of the country does not imply a coat of arms on the panel, and in this form the flag is almost identical to the Russian one. New designs for the flag of Slovenia are still being considered.