Things to do in Sochi 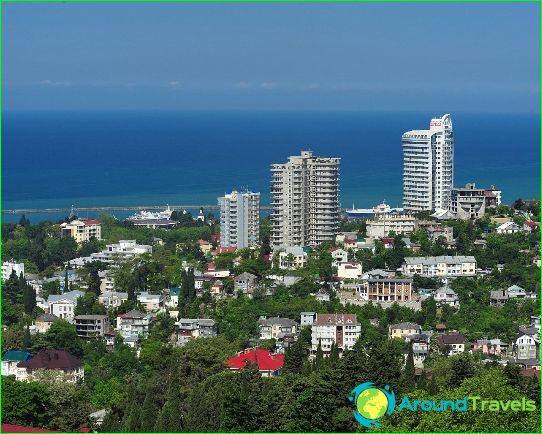 Entertainment in Sochi is an opportunity to ride a jet ski, take a parachute flight over the sea, go diving, play paintball ...

What entertainment in Sochi?

An interesting entertainment can be a walk along the Sochi Arboretum, which consists of 2 parts (they are connected by a tunnel passing under Kurortny Avenue). It is worth noting that you can get to the top of the park by funicular.

Walking through the park, you will see rotundas, gazebos, decorative stairs, peacocks, ponds with ducks and pelicans floating in them, many plants (bamboos, palms, chestnuts, azaleas, hydrangeas) and sculptures (“Adam and Eve”, “Neptune”), as well as visit the Butterfly Garden.

Active travelers can ride on alpine meadows in jeeps, climb mountain peaks by cable cars, go on an excursion to deep gorges and beautiful waterfalls.

Entertainment for children in Sochi

Children should be delighted with a trip to the water park “Lighthouse” - there are both children's and adult slides (look for them in the corresponding zones).

An equally memorable entertainment can be a visit to the Nikola Tesla Museum - guests are offered to watch an animated film about Nikola Tesla, see physical experiments, admire the Tesla show with laser special effects.

With the kids, you should definitely look into the Sochi Art Museum: after going to the interactive hall (exhibition “Miracles of multimedia”), you can become “part” the picture you like. So, for example, you will see yourself in the forest with bears (the image will be displayed on the big screen). In addition, here you can compose fragments of your own picture on the interactive table.

Planning a vacation in Sochi? Here you will find a variety of entertainment in the form of visiting discos and beaches, sightseeing, active pastime in nature.