Articles about Volgograd
by Ashley 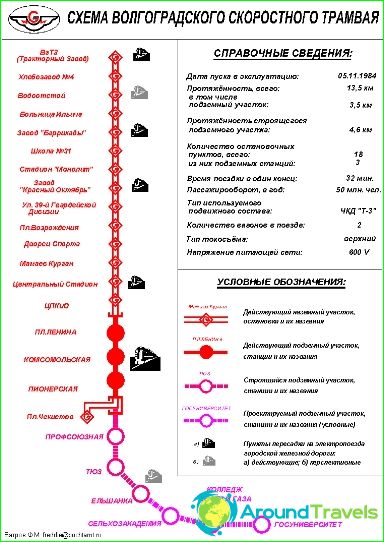 The Volgograd metro is a light rail system that serves 17 km in the central and northern parts of the city. For Volgograd, stretched along the Volga for 50 km, this type of urban transport is necessary and very important. The light rail system transports about 10 million people annually.
The history of the Volgograd metro began in 1971, when the process of reconstruction of an ordinary city tram was launched. Five years later, the authorities decided to build an underground section of track and three stations. The project was completed by 1984, and the first route connected the Tractor Plant and the Chekistov Square.

Today, the high-speed tram connects the northern part of the city with its center, and its line runs through five districts. The route runs along the avenue. Lenin. The Volgograd metro line does not cross other transport routes at the same level with them, and therefore is off-street. The time it takes for the tram to cover the entire route is just over half an hour. Average speed of wagons does not exceed 25 km per hour.

In total, 22 stations serve passengers on the Volgograd high-speed tram lines. Five of them are located underground and meet the standards of a full-fledged metro. They have unused parts, and therefore their platforms can be significantly lengthened to be able to receive not only tram cars, but also metro trains. This gives the right to classify this type of urban public transport as a full-fledged metro. The third stage of the high-speed tram, the construction of which is scheduled to begin in 2014, will extend the line southward by 7 km by 2018 and connect the Tulak district with the University of Volgograd.
All light rail stations are equipped with a video monitoring system.

Volgograd high-speed tram starts its work at 6.00. The cars run at intervals of up to 4 minutes during rush hours on the ST route and up to 9 minutes on the ST-2 route. In the peak time, the intervals are 7 and 9 minutes, respectively. In the late evening, the tram will have to wait 20-30 minutes, and the last carriages leave at around 23.30, depending on the station..

Tickets for the Volgograd metro are purchased in the salon from the conductor. Ticket offices at underground stations do not always work. In order to save money, you can buy a monthly SUE pass «Metroelektrotrans».

Photos of the Volgograd metro