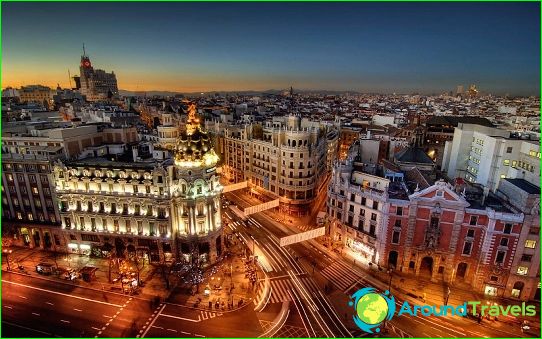 The coat of arms of the Spanish capital depicts a bear with a strawberry tree. These symbols of the city are also immortalized in the sculptures on its main square. Tour participants in Madrid can also visit one of the most interesting museums of world importance, learn to dance flamenco, feel the charm of observing a siesta and discover the wines of Spain.

The city is located at an altitude of more than 600 meters above sea level, and the natural attractions here are the Guadarrama Mountains. Madrid was founded by the Mauritanians, who laid a military fortification here at the beginning of the 10th century, but according to the inhabitants themselves, their city was founded by the ancient hero Oknius long before the arrival of immigrants from North Africa..
The climate in the capital of Spain is continental, and the altitude is conducive to colder winters than on the seashore. The thermometer in January often reaches minus marks, while snow in Madrid is a very common phenomenon.
In summer, the heat can be +30, and with minimal rainfall, a real drought sets in in the city. That is why the most favorable time for tours to Madrid is spring and autumn..