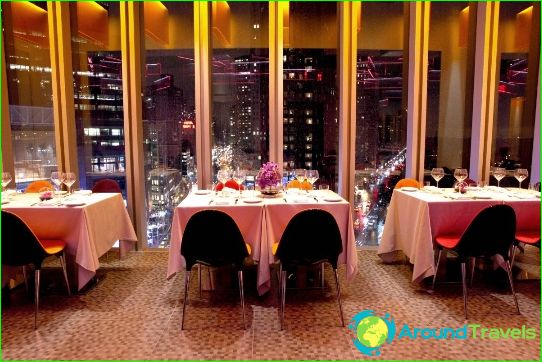 Stunning, sparkling and diverse, New York is mesmerizing at first sight. The bustling streets seem familiar due to the fact that everyone has seen them many times in the movies. Locals can easily stop to chat with a tourist, and there are so many versions of why the city is called the "Big Apple" that you can get confused. There are excellent hotels, convenient shopping, and the best restaurants in New York will amaze you with their magnificence, uniqueness and diverse cuisine of the world..

Local American dishes are quite simple and famous all over the world, but it's one thing to eat a hamburger or steak at home, and it's another to try it in New York itself. The best restaurants in the city with American cuisine: cafe "Eatery"; restaurant "Alias"; cafe "Juventino"; cafe "Diner"; restaurant "Calexico Cart".

The national cuisine of any country in the world can be tasted in any of thousands of similar restaurants, in the city there are a lot of Arab, Indian, Russian, European and other establishments for the most refined taste and wallet.

Those who are not afraid of heights will definitely like it in such a place. For rooftop views of New York, for example, the museum is worth visiting Soaked, The Press Lounge, Upstairs at the Kimberly, Upper Elm, and Rare View Rooftop. There is an excellent selection of cocktails, alcoholic and fruity, comfortable sun loungers and a great elegant design. There are also professional bartenders at the service of visitors, all as one with diplomas of the best culinary schools.

There are tons of restaurants in New York that bear this famous insignia. This is where the most exquisite dishes, luxurious interior and full of celebrities are sure. Among such establishments, the following can be distinguished:

For sweet donuts and cakes in New York, go to Magnolia Bakery. This is the most beloved bakery by the locals; it is a landmark of the city. Therefore, it would be a big mistake not to be here. An older pastry shop is located in Little Italy and is called "Ferrara". It has been working since 1892 and has been a favorite place for presidents and millionaires. Junior's Cheesecake bakery is slightly younger (opened in 1929). Here are the best cheesecakes in town.

New York is unique. It is simple and complex at the same time, because it mixes so many cultures and traditions of immigrants. Living here has long been the dream of many Americans, and not only of them..