Articles about San Francisco
by Ashley 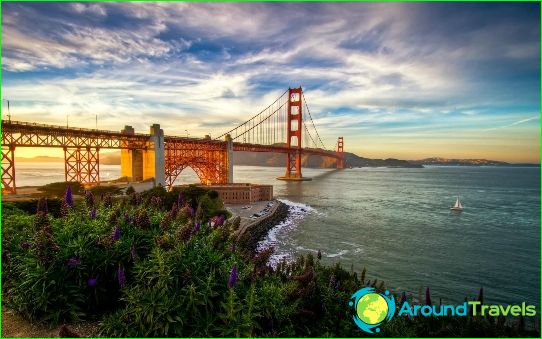 Locals affectionately call it Frisco and love the winding streets running down the hills with sincere and light love, the old tram, which you can jump into at the bend, and the bridge with bright red pillars, diving into the thick fog over the Pacific Bay. Tours to San Francisco are bought not only by foreign tourists, but also by the Americans themselves, because it is here that you can feel the spirit of free-thinking and meet the strangest, but insanely talented people on earth. In the literal and figurative sense of the word "crazy".

Scattered over forty-three hills on the west coast of the United States on the shores of the bay of the same name, San Francisco appeared on the world map at the end of the 18th century. First, Franciscan monks founded a mission here, and then the town turned out to be the territory of Mexico.
The growth of the city was greatly influenced by the gold rush that began in 1848. The gold found in California made thousands of people look for a better life here, and very soon Frisco became the largest city west of the Mississippi. Located in a tectonic fault zone, it often suffered from earthquakes and fires caused by them, which almost completely destroyed old buildings..

Flowers of love at the Golden Gate

In the middle of the last century, tours to San Francisco were especially popular with hippies, for whom the city became the epicenter of the sexual revolution, a symbol of freedom and the apogee of all the changes that were taking place in Western society. Thousands of suffering people flocked here to live freely and for their own pleasure. Celebrating freedom against the backdrop of the Golden Gate Bridge, hippies have forever entered Frisco's history as people of an era of change..
The bridge itself is the main visiting card of the city, and every traveler arriving on a tour in San Francisco has the opportunity not only to admire the majestic structure, but also to walk along a specially designated lane or ride a bike. The Golden Gate Bridge was built in the 30s of the twentieth century and for almost 30 years it remained the largest suspension bridge in the world. The height of the carriageway above the water is more than 60 meters, and the length of the main span is 1280 meters.