Home › Articles about Colombia › Flag of Colombia: photo, history, meaning of the colors of the national flag of Moldova

Flag of Colombia: photo, history, meaning of the colors of the national flag of Moldova

Articles about Colombia
by Amber 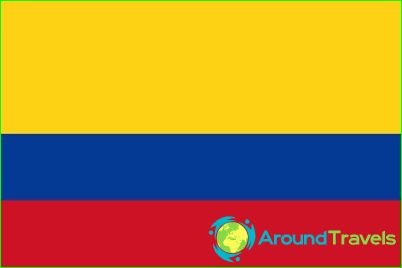 An integral part of the Republic of Colombia, along with its anthem and coat of arms, is the flag of the state.

Description and proportions of the flag of Colombia

The flag of the Republic of Colombia is a rectangle whose length relates to its width as 3: 2. It looks like a tricolor, the horizontal stripes of which are uneven. The widest one - the upper stripe of rich bright yellow color - occupies half of the flag's area. The remaining two stripes are equal in width. Each of them makes up a quarter of the area of ​​the cloth. The lowest stripe is bright red, and between it and the yellow one is dark blue.
The naval flag differs from the national one in that the coat of arms of the Republic of Colombia is located exactly in its center on a part of the yellow and blue fields.
The center of the coat of arms is a shield, the upper third of which resembles the image of a pomegranate fruit of New Granada. This viceroyalty existed before on the land of the modern Republic of Colombia. On the sides of the pomegranate there are cornucopia depicting the main treasures of Colombia - its minerals. The middle third of the shield contains the image of the Phrygian cap, which serves as a symbol of freedom for the inhabitants of the country. The lower part of the shield is a reminder of the importance of the country as a maritime power. Two ships symbolize exits to the Atlantic and the Pacific Ocean.
At the top of the coat of arms is the condor - the national bird and symbol of the country. He holds in his paws the motto of the country «Freedom and order», inscribed on a ribbon and an olive branch.

History of the flag of Colombia

The Colombian flag was adopted in the fall of 1861 after the outbreak of civil war in the Granada Confederation, which ended in 1863 with the formation of the United States of Colombia. The Confederation used a vertical tricolor, on which stripes of red, blue and yellow colors equal in width were located. The closest to the pole was the red field, followed by the blue and yellow. These three colors symbolized the most important values ​​for Colombians. The yellow color represented the gold reserves of the local land, which is rich not only in precious metals, but also in other minerals. Blue represents the seas that wash the land of Colombia and the water that gives life to its inhabitants. The red stripe on the flag is a tribute to the memory of all those who died in the struggle for the independence and prosperity of the country. She recalls the blood shed by patriots.
The coat of arms of the country, depicted on the naval flag, was adopted in 1834 and has remained practically unchanged since then..