Home › Articles about Karelia › Airport in Petrozavodsk: scheme, photo. How to get to Petrozavodsk airport 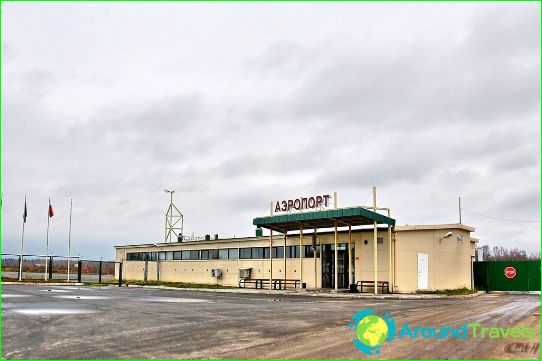 Besovets - the airport in Petrozavodsk is located 12 kilometers from the city center, towards its northwestern part, in the vicinity of the village of the same name. The runway of the airline has a length of 2.5 kilometers and is capable of accommodating aircraft with a takeoff weight of up to 150 tons such as Il-114, Tu-134, An-12 and helicopters of all types. Units of the Air Force and border troops of Russia are constantly deployed on the territory of the Besovets airport..
The airline mainly serves domestic flights; its main carriers are the Russian companies RusLine and AkBars Aero, which operate flights to Moscow and Simferopol..

The airport in Petrozavodsk was created in 1939 on the basis of a rest house «Matkachi» in the Karelian village of Besovets and was originally used as a military airfield. And only in 1964 the first passenger flights were made from here. And at the beginning of the 90s, the airport in Petrozavodsk began to service international flights, mainly charter flights to popular tourist countries.
In 2009, after the modernization of the light-signaling system, the airline received the opportunity to receive aircraft at night..

There is one problem that concerns the whole of Karelia. The passenger traffic in the republic is too small. Meanwhile, the favorable geographical position of the airport in Petrozavodsk can open up beneficial air routes between Scandinavia and Europe. But in order for the project to work, a serious reconstruction of the runway and the airline as a whole is required..
It is planned to spend 500 million rubles on the reconstruction of the airport this year. According to the Deputy Minister of Transport of Russia Valery Okulov, who visited Petrozavodsk in May 2014, by the fall, residents of Petrozavodsk and its guests will see a new passenger terminal, runway and other changes..

The airport in Petrozavodsk offers a minimum range of services for the comfort and safety of flights to passengers. On the territory of the airport there is a medical center, a room for a mother and a child, and a waiting room. There are ticket offices and post offices. Round-the-clock security of the airport is provided. There is a parking lot for personal vehicles at the station square..