Articles about Shanghai
by Alexis 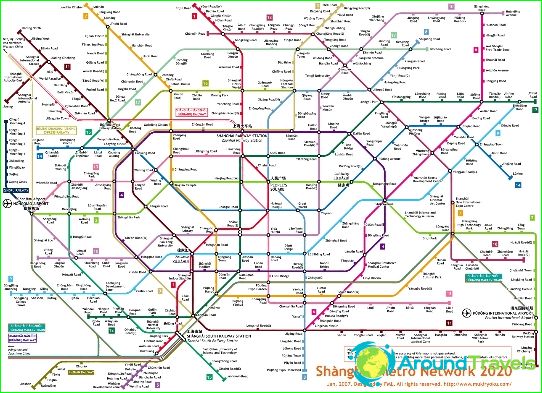 Shanghai metro map
The Shanghai Metro was opened in 1993 and is the third subway in China after Beijing and Tianjin. Since then, the Shanghai Metro has become one of the fastest growing transportation systems in the world, constantly expanding its network..
The total length of the lines is 538 km, with a total of 14 metro lines and 329 stations - this is one of the longest metro lines in the world. Shanghai Metro ranks third in the world in terms of annual passenger traffic - in 2013, the number of trips exceeded 2.5 billion.The record for daily passenger traffic was set on December 31, 2013, it amounted to 8,898,000 passengers.

The Shanghai subway operates from 5 am to 12 am, the train interval is 3 minutes. The opening hours of each station are different. Train timetables (first and last) are indicated on the information boards of each station. The metro map is the intersection of the circular and radial lines. Wherein. oddly enough, the route of Line 4 (circular lines) overlaps with the route of Line 3.
Many stations on Lines 4, 6, 7, 8, 9 and 10 have safety screens at the edge of the platform with sliding acrylic doors. Similar screens also appear on older lines. At Narodnaya Square Station of Line 2, the platform has half-height automatic sliding safety doors.
They go into the Shanghai subway cars, as in all Chinese subways, at the same time - they go out in the center, go on the sides. The cars are not separated from each other. The stations in the cars are announced in two languages: Chinese and English.

Single-trip tickets can be purchased at ticket machines and at some stations at the ticket office. The ticket is applied to the turnstile scanner and is stored until the end of the trip - at the exit the ticket is left in the turnstile. Rechargeable cards can be paid at ticket offices and service centers at metro stations, as well as in small shops within walking distance and banks throughout the city. The card is valid for all types of public transport.
There are very long walkways between Shanghai metro stations, where retail stores are located: digital kiosks, newsagents, convenience stores and bookstores. ATM machines can be found at stations in the city center and some suburban.
Like many other metro systems in the world, the Shanghai Metro uses a zone-based fare system. And since December 25, 2005, Shanghai switched to a single-type ticket for all types of transport. If the fare exceeds the cost of the ticket, passengers can pay the difference at the ticket offices located next to the turnstiles..
For pensioners over the age of 70, the metro ride is free (except during rush hours from 7.00 to 9.00 and from 17.00 to 19.00 on weekdays). They use social security cards with a built-in chip to pass..