Viewpoints of Feodosia. List of the best observation decks in Feodosia

Articles about Feodosia
by Alexis 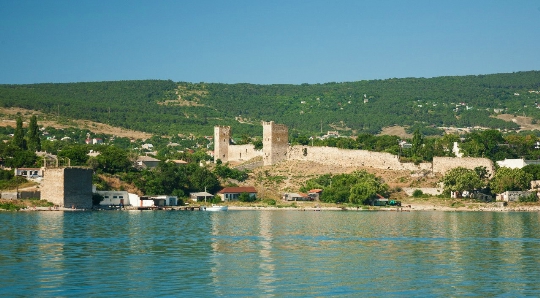 Climbing the viewpoints of Feodosia, vacationers will be able to admire the Genoese fortress from a different angle (despite the fact that they began to dismantle it back in the 18th century, some of its elements are still intact), the tower of St. Constantine (in the 14th century it was a powerful fortification ), The Karadag reserve, the Mufti-Jami mosque (despite numerous reconstructions, today the dome and the minaret remain unchanged), the Church of All Saints and other objects.

The observation deck (which is one of the best; its opening in 2012 was timed to coincide with the celebration of the city's day) on Mount Mithridates (height - 55 m) invites visitors to enjoy a panoramic view of Feodosia, as well as sunrises and sunsets over the bay. It is worth noting that on the western slope of the mountain, vacationers will be able to see the ruins of the tower of St. Thomas.

How to get there? Finding this place is not difficult - it is located in the south of the city: from the station you need to walk along Gorky Street to the park “Morsad”; then, having reached the Mithridatskaya street, you need to climb up the mountain. If you have no desire to look for an observation deck on your own, then you should go on a sightseeing tour of Feodosia on an electric car (this place is included in the excursion program).

Since it rises at a height of 65 meters above sea level, from here you will be able to see Feodosia and Feodosiya Bay, the villages of Primorsky and Beregovoe, as well as view Cape Chauda and the rock-island Ivan Baba in the distance. In addition, there is the Ilyinsky lighthouse on the cape, 15 m high (tourists will not be offered to go inside, but they will not interfere with walks in its surroundings).

The institution invites guests to enjoy dishes of Mediterranean and European cuisine, without looking up from the sea - from the summer veranda, which can accommodate up to 150 people, who wish to admire the sea coast.

In this park, guests will be able to experience the rides “Orbit”, “Hammer”, “Bench”, “Swans”, as well as the Ferris Wheel, from the booth of which you can admire the Feodosia beauties. Address: Embankment (near the monument to paratroopers).

Since the village of Beregovoe is part of Feodosia, vacationers should go there to find an observation deck - there is a 5-meter gazebo, fenced off from the highway, and benches (the length of the site together with a walking path is 100 m; the nearest plans of the village management include the creation embankment more than 1.5 km).