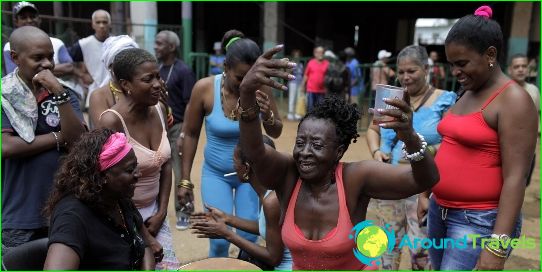 In recent years, Liberty Island has become more and more popular with tourists from various countries. The reason for this is the snow-white beaches, and the endless blue of the Caribbean Sea, inexpressible in words, and the incendiary dances of charming mulatto women. But the most important thing that travelers going to Cuba strive for is an amazing feeling of freedom, which covers immediately upon arrival on a magical island. Do you want to feel like a bird over which no one has control? Your choice is New Years in Havana!

On the evening of December 31, the inhabitants of Liberty Island fill all the containers in the house with water and solemnly pour it out of the windows when the clock stops striking. So the old year is driven away and all the troubles that happened in it are washed away. None of the bystanders has anything against the shower, because the average January temperature here is no less than +25 degrees. During the striking of the clock, it is customary to eat 12 grapes and make wishes. This tradition came from Spain, and Cubans are trying to fulfill the old rite..

Parisian cavalier and the salty taste of the Malecon

The Cuban capital is generous with a festive mood. There are no sad faces or sad eyes here. The city seems to be created for unrestrained fun and noisy carnivals. New Year's traditions on the island have been sacredly preserved for many years: once only this winter holiday was left to the inhabitants of the island, banning Christmas.
The best place for a New Year's walk in old Havana is Saint Francis Square with its famous Fountain of Lions, next to which there is a sculpture of the Parisian Knight. You can learn his touching and sad story by taking a ride in a carriage with cute horses: every second middle-aged coachman speaks excellent Russian.
In a carriage, you can go to Malecon - the city embankment, which is the hallmark of the city. Dance and music lovers gather here, impromptu concerts and organized processions take place.
New Year's Eve in Havana is celebrated by the inhabitants at generously set tables. The menu includes a pig on a skewer with black beans, fried bananas, mangoes and, of course, His Majesty rum! Cuban rum is a famous brand.
After celebrating, you can visit the Rum Museum on Calle San Pedro on the shores of the Bay of Havana, or have a drink of the famous Cuban «Mojito» in Hemingway's favorite pub «Bodeguite del Media». But again, this is just a brand, and not a cheap one. The most delicious mint cocktail is prepared by Cuban housewives. Make friends with the locals to make your New Year holiday in Havana even brighter and more memorable.