Home › Articles about Georgia › Flag of Georgia: photo, history, meaning of the colors of the state flag of Georgia 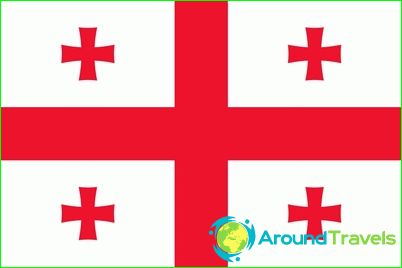 One of the integral state symbols of any country is the flag. Georgia is no exception here. The flag of Georgia is a white cloth with a large red cross in the middle. This cross visually divides the flag into four identical rectangles, each of which contains one cross. These small crosses are similar to the large ones, made in red..
This two-color flag has its own history and meaning. It has long been believed that a truly common Christian symbol, which perfectly characterizes Jesus Christ and the four evangelists. White is the personification of purity and wisdom, purity and innocence. Red indicates courage, justice, love and courage..
A large cross in the center stretches from edge to edge of the flag. It is called the Cross of St. George. In addition to the flag of Georgia, it is also used in the heraldry of England. In general, this cross is quite famous. Back in the 5th century, it symbolized the Georgian kingdom. Small crosses in rectangles are called Bolnisi crosses.
The history of the emergence of the flag of Georgia is rooted in the distant past. The model of the flag of five crosses appeared in the 13th century. Historians suggest that, starting from the fifth century, there was one large cross on the flag, and only in the time of George V four more crosses appeared on the state symbol.
In principle, such a flag has always been the state symbol of Georgia, but it is worth noting that there were years when the flag was changed. These are the periods from 1918 to 1920 and from 1990 to 2004. During these periods of time, there was a flag consisting of three colors: dark red, black and white..
Dark red was a manifestation of hope for good times in the future and spoke of a good past, black was a symbol of Russian rule, and white, invariably, was the personification of hope and tranquility..
The modern look of the white and red flag was officially adopted in 2004. It is he who can be called a truly national symbol of Georgia. Its proclamation was preceded by the velvet people's revolution of 2003, when the freedom-loving Georgian people declared this very flag a symbol of victory. Thus, the people, who hoped for the unification and flourishing of their state, made their choice. The fight against Shevardnadze's regime ended with the approval of the white flag with red crosses as the official symbol of the country.

Photos of the flag of Georgia