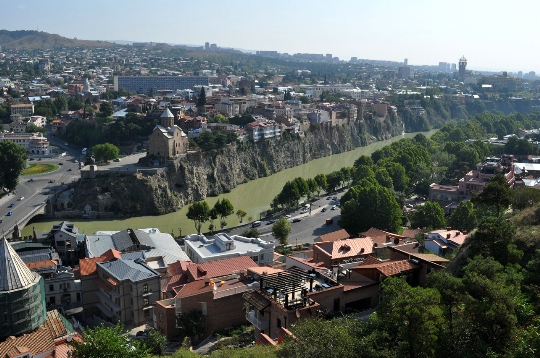 The rivers of Georgia can be conditionally divided into two categories: belonging to the Black Sea or the Caspian Sea basin.

The Kura is the largest river in Transcaucasia, which passes through the territory of three states at once: Turkey, Georgia and Azerbaijan. The total length of the river is 1364 kilometers.

The river has a rather unusual name and there are several opinions about its origin among scientists. According to one of them, the name comes from the word «chickens», which can translate as «reservoir» or «water, river».

The source of the river is the province of Kars (northeastern Turkey). Next Kura «heading off» through Georgia to Azerbaijan, where it ends the path, flowing into the waters of the Caspian.

To Tbilisi, the river passes through hollows and gorges (the most famous is the Borjomi Gorge). Passing the capital, the Kura significantly expands its channel, and its path runs through dry steppes. The water in the river is muddy, especially in the lower reaches. The largest tributaries of the river are: Bolshaya Liakhvi; Faith; Araks; Alazani; Aragvi; Temples.

Despite the fact that the water in the river is rather polluted, fish can be found here. Here you can catch catfish, carp, pike, silver bream, crucian carp, etc..

Aragavi is geographically located in Eastern Georgia and is a left tributary of the Kura. The total length of the river is 66 kilometers. The river was formed at the confluence of three rivers at once: White Aragvi, Black Aragvi and Pshav Aragvi. The source is located near the village of Pasanauri.

Of the interesting places located on the banks of the river, it is worth noting the Zedazeni Monastery, founded in the 6th century and preserved to our time.

Algeti is located in the southern part of Georgia. And this is another tributary of the Kura. The total length of the river is 108 kilometers. Algeti is the longest river in the Kvemo Kartli region. Its main tributaries are the Gudarekhitskali and Dasviskhevi..

Algeti Nature Reserve is located not far from the source. It is located on the slopes of the Trialeti mountains (northern side). The total area of ​​the park is 6822 hectares.

The total length of the river is 140 kilometers. It passes through the territory of two states - South Ossetia and Georgia. And this is the left tributary of the Rioni River.

Kvirla originates in the gorges of the Rachinsky ridge (South Ossetia). The main part of the channel runs through the territory of Georgia. Conventionally, the river flow can be divided into two parts: before the confluence of the Dzirula (left tributary), the Kvirila has a mountainous character, and after that it turns into an ordinary plain river. The river is popular with rafting enthusiasts.

A very small flat river, only 30 kilometers long. It flows into the Black Sea. Choloki is the border between Adjara and the region of Guria. In the 19th century, the river bed divided the borders of Turkey and the Russian Empire.

Streets of the red light districts of ...