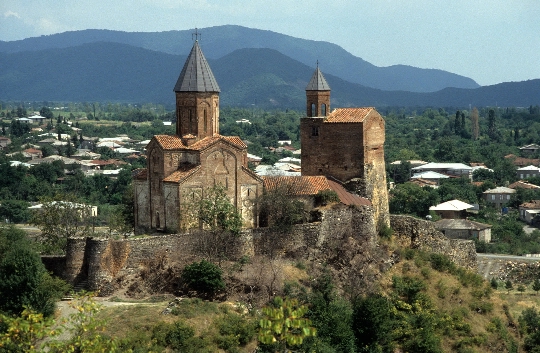 A trip to Georgia will leave a lot of memories and great photos. But in order for everything to go well, you need to know what is the most convenient way to travel between cities and attractions..

On the roads, the usual for us right-hand traffic is accepted, but you need to prepare in advance for the fact that the tracks are in a deplorable state. Mountain roads are ordinary gravel and rubble surfaces. To get to some areas, in particular, Guria and Svaneti, without the help of special equipment, it will not work.

The main way to travel between cities is by buses. The whole country is covered by a huge network of bus routes connecting almost all settlements.

The public car fleet is very outdated. There is practically no bus timetable. Cars leave for the flight after the cabin is full. Tickets must be bought directly from the driver and asked to stop at a specific location.

Route taxis, when compared with buses, are a more comfortable option for moving around the country. But they also do not have a specific timetable, and the minibus leaves after the cabin is full. It is the minibuses that are the main way to travel. Exception - big cities.

In the mountainous regions of the country, public transport is quite busy. As a rule, there are no more than 2-3 trips per day, so you should not postpone your departure to a later flight. In this case, you may not get anywhere at all, since cars often break down..

The capital of Georgia, the city of Tbilisi, is quite comfortable in terms of movement. There is a metro, buses and taxis of all kinds (minibuses and classic ones). If you decide to take a taxi, remember that you need to negotiate the cost in advance. In addition, the price will depend on the time of day and the end point of the journey..

The metro operates from six in the morning until eleven in the evening. The metro is very convenient to get to the historic city center. Unfortunately, all the inscriptions at the stations are exclusively in Georgian, and therefore you will need the help of local residents.

The railway communication is presented in several directions: Tbilisi - Valais; Tbilisi - Batumi; Tbilisi - Zugdidi; Tbilisi - Gardabani; Tbilisi - Sadakhlo. The carriages are divided into general and compartment cars. Travel is relatively inexpensive. An inconvenience is the absence of duplicate inscriptions on names, signs and schedules.

Domestic flights can only be made from Tbilisi to Batumi. In general, air transport in the country is completely undeveloped..