Home › Articles about Japan › Flag of Japan: photo, history, meaning of the colors of the national flag of Japan

Flag of Japan: photo, history, meaning of the colors of the national flag of Japan 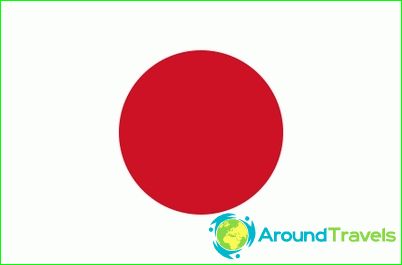 The Japanese call the flag of Japan hinomaru, which can be translated as «solar circle». By its structure, this is a white canvas with a large red circle right in the center and, as is already clear, this is a direct association with the Sun, which rises.
If you believe the legend, then a similar banner appeared in the thirteenth century, when the Mongols invaded Japan. The use of such a flag was proposed by Buddhist monks to the Japanese emperor, who was considered a descendant of the sun goddess.
It began to be perceived as the state flag when the national restoration began (in the sixties of the nineteenth century). Width to length measures have a ratio of two to three. At the moment, the flag is considered both civil and state.
So far, nothing is known about how this flag came about. Since the seventh century, the sun that rises has been considered the Japanese state symbol. Even Japan itself, since then, as you probably know, has been called the Land of the Rising Sun (perhaps, among many different nicknames, this turns out to be the most popular). Even in old Japanese stories, there are references to the fact that in the past samurai painted on their own fans the sun that rises.
There are many legends about the origin of this flag. According to one of them, this flag was presented by Nichiren, a Buddhist monk, to his shogun as a banner against the Mongol invasion that occurred in the thirteenth century. Among other things, the banner is considered as a symbol of the emperor's house in Japan, and is also associated with the goddess Amaterasu, who is considered the one who began the Japanese imperial family..
By the way, today you can still see the hinomaru, which is almost the oldest example of the flag. It is located in Yamanashi Prefecture inside the Umpo-Ji Fortress. This banner is more than a thousand years old and is considered a real relic belonging to the Japanese Takeda clan. There are legends that this flag was presented by Emperor Go-Ryozei to the leader of the Yoshimitsu clan. In general, we can talk about the rich history of Japanese flags, which were constantly changing, both in their own structure and in their status..