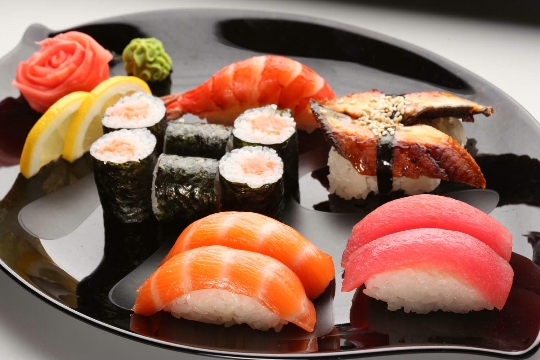 Japanese cuisine is original and distinctive (products are subjected to minimal heat treatment in order to preserve their natural taste and appearance as much as possible).

The dominant role in Japanese cuisine is given to rice (it is served in a separate container as an independent dish or side dish), which is not salted, but served with various seasonings and sauces.

The Japanese love fish and seafood: despite the fact that there are recipes that make seafood carefully processed, they are often consumed raw (sashimi - pieces of raw fish with wasabi and soy sauce). Dried seaweed, mushrooms, tofu cheese, cucumbers, radishes are often used as a side dish or snack..

If you want to try sushi, please be aware that “sushi from the chef” can be quite expensive, so in order to save money, it is better to order assorted sushi and sashimi (“moriawase”) or buy them in kaiten, where plates of sushi “move” along the conveyor belt (visitors can take whatever they like on their own).

In Tokyo you can visit “Kyubey” (this Japanese restaurant specializes in preparing a variety of sushi, rolls and sashimi), in Sapporo - “Aji no tokeidai” (signature dish is classic ramen noodles) or “Hanamaru” (it will appeal to lovers of sushi and other national food), in Kyoto - “Omen ginkakuji honten” (a budget establishment where you can taste noodles with various spices and sauces) or “Tsujiri honten” (sweet tooth will love to enjoy Japanese tea with sweets here), in Osaka - “Ippudo” (the signature dish is soba noodles, and in addition, Japanese dishes are prepared here according to author's recipes).

Those interested in Tokyo (“Sushi academy”) can learn the art of making sushi in both a short and full professional course (there is an opportunity to attend private lessons or take advantage of evening courses). It is worth noting that online master classes from famous chefs are often held here. Those who would like to learn about Japanese cooking traditions in Osaka will offer to enroll in courses at the Tsuji Culinary Academy (classes are conducted in English). If your goal is to learn how to cook several dishes of Kyoto cuisine in a couple of hours, they recommend you to look at the culinary courses at the Kyoto house of Waku Waku Kan..

You can come to Japan during the mushroom festival (October) or the Autumn Festival (Sapporo, September), which is dedicated to gastronomy, so visitors will have to wait for master classes and tastings.