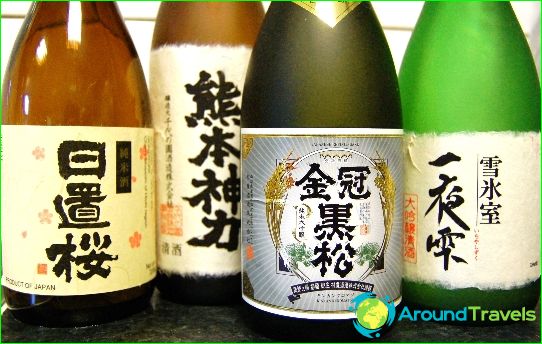 It is believed that the cuisine of the Land of the Rising Sun is one of the most unique in the world. It is characterized by simplicity and naturalness, and all dishes are made with minimal heat treatment of the most common products. Nevertheless, Japanese drinks are not as simple as it might seem to an inexperienced traveler, and the process of their preparation can be compared with a sacrament or ritual passed down from generation to generation..

Japan's customs regulations allow up to three bottles of alcohol to be imported into the country, each of which is more than 0.75 liters. The export of alcohol from the country is allowed within reasonable limits, which is quite sufficient for those who decided to bring several bottles of good sake from the foot of Fujiyama..

The main world famous national drink of Japan is rice vodka sake. However, this alcoholic masterpiece is called vodka not quite rightly: it is produced not by traditional distillation, but by the process of pasteurization..
The first sake appeared at the imperial court at least two thousand years ago, and today the technology of its preparation, as then, includes several production stages:

To make the highest grade sake, the Japanese use a special kind of rice, Yamadanishiki. This agricultural crop grows in Hyogo Prefecture, where water from special springs is also obtained. Its composition should not contain iron and manganese, and potassium and phosphorus, on the contrary, should be contained in excess.

The inhabitants of the Land of the Rising Sun will hardly tell the guests all the secrets of making sake, but they will certainly teach the culture of sake. The ceremony requires special dishes, but the opinion that sake should be warm is not entirely true. Like all alcoholic beverages in Japan, sake can vary in quality, and only the cheap product is heated to dissipate an unpleasant smell or taste. Good sake, on the other hand, is cooled to +5 degrees and savoring, warming in the mouth and enjoying the aroma.