Airport in Amsterdam: scheme, photo. How to get to Amsterdam airport 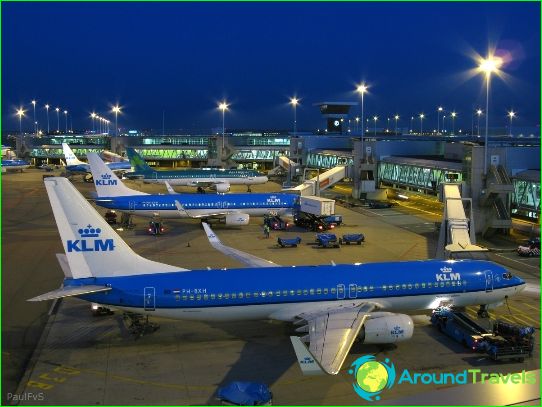 The airport in Amsterdam, known as Schiphol, is the main airport in the Netherlands and the next largest airport and the passenger traffic after the British Heathrow Airport. It is located 17 kilometers from the center, in the Haarlemmermeer district. Interestingly, the airport in Amsterdam has won the title of "Best Airport in Europe" for fifteen years.

The city and the airport complex are connected by several bus routes, the interval of which is 8-10 minutes, as well as by high-speed express trains. For those who arrived at the airport by private car, there are several parking lots on the territory of the airport, providing services of different prices, depending on the estimated parking time. If necessary, a parking space can be booked online.

On the territory of the Schiphol terminals there are several comfortable recreation areas that can meet the various needs of passengers: there is a business lounge with a library, computer tables, a conference room and light snacks, a mother and child room with sleeping and play areas, as well as a main relaxation area, with TVs and comfortable chairs. The airport in Amsterdam also includes a shopping center called "Schiphol Plaza" with boutiques and retail outlets, the services of which are actively used not only by aircraft passengers, but also by local residents. To make the waiting time go faster, a number of exhibitions from several museums are located on the territory of the airport, where you can get acquainted with objects of art and buy souvenirs. In the airport terminals in the waiting area, after passing through customs control, cafes and restaurants are ready to offer a delicious lunch or a light snack before the flight, and duty-free shops amaze with their diversity. At the disposal of passengers in the terminal building, there are round-the-clock storage rooms, as well as a baggage packing service, where for a small fee a bag or suitcase will be instantly wrapped in a special film that helps to protect things from dirt or damage on the road..