Population of the Netherlands 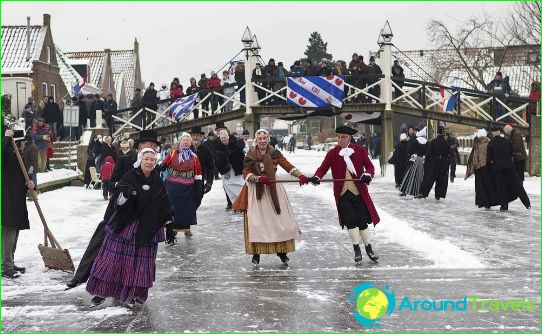 The population of the Netherlands is over 16 million.
National composition:

The Dutch mainly inhabit the central, northern and eastern regions of the country, the Flemings - the provinces of Brabant and Limburg, the Frisians - the provinces of Friesland and Groningen.
393 people live per 1 sq. Km, but in some areas the population density reaches 850 people per 1 sq. Km (a particularly densely populated area is the large conurbation Randstad - a third of the population of the Netherlands lives here).
The official language is Dutch, but German and French are widely used.
Major cities: Amsterdam, The Hague, Rotterdam, Delft, Utrecht, Haarlem, Leiden, Voleidam, Zaandam.
Residents of the Netherlands profess Catholicism, Protestantism, Islam, Hinduism, Buddhism.

On average, residents of the Netherlands live up to 80 years (male population lives up to 78, and female population lives up to 83 years).
The Netherlands managed to achieve excellent indicators due to decent deductions for health care - more than $ 5,000 per year for 1 person. In addition, the Dutch smoke little - 5 times less than the Russians. Despite the fact that the Dutch eat mostly cold snacks (sandwiches) all day long, the level of obesity in the country is quite low - only 11% (the average for Europe is 18%). As for alcohol consumption, the Dutch mainly consume low-alcohol drinks (Holland is among the 30 countries in the world in terms of alcohol consumption).

Traditions and customs of the inhabitants of the Netherlands

The Netherlands is an interesting country where prostitution, the use and sale of weak drugs, same-sex marriage and euthanasia are legalized.
Almost all Dutch families have houses with small courtyards with sculptures, tables and chairs, and flowers. In addition, in the Netherlands, it is not customary to curtain the windows in the house (the owners do not hide anything from others).
The birth of children is of particular importance in the life of the Dutch. When a new family member appears, the Dutch dad installs a stork with a baby in the yard, which he makes from improvised means. In addition, when a baby is born in Holland, it is customary to send postcards to relatives and friends informing about this joyful event..
The Dutch are good-natured and friendly people: they constantly say hello (in the park, shop, bus) and can even have a casual conversation on the street or in a cafe. But when visiting the Netherlands, you should not show disrespect to citizens of color (this can be regarded as racism, which will at least entail administrative punishment).